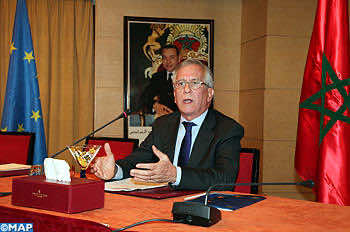 The year 2012 was marked by continuity and the strengthening of relations between Morocco and the EU, head of the EU delegation in Morocco, Ambassador Eneko Landaburu said on Monday.

The results of the year 2012 were full of initiatives to bring closer the two parties, in addition to a financial cooperation which was reinforced with the signing of programs that would contribute to implementing the new constitution, he said in a meeting to discuss 2012’s results.

Three major, innovative programs were launched totaling over one billion and 700 million dirhams as the “making the advanced status succeed” program, and the rural development program for the Al Hoceima region.

Backing the country’s political and economic transition takes concrete substance through the support for sectoral policies, in addition to new tools for civil society, he said.