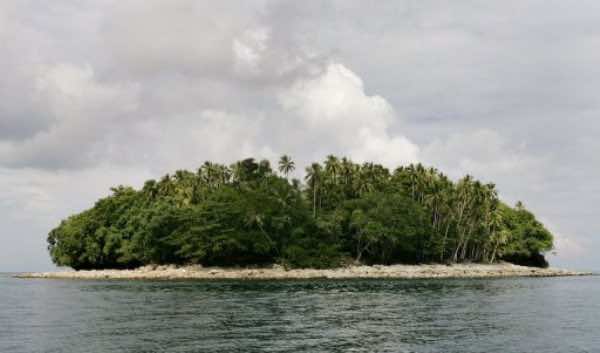 A major 8.0 magnitude earthquake was feared to have flattened villages in the Solomon Islands on Wednesday, and triggered a tsunami with destructive potential for Pacific nations’ coasts, monitors said.

A small tsunami wave reached part of the Solomons and watches were in effect as far afield as Hawaii, the Pacific Tsunami Warning Centre said. New Zealand was also on guard, but monitors said there was no threat to Australia.

The US Geological Survey said the quake struck at 0112 GMT near the Santa Cruz Islands in the Solomons, which have been hit by a series of strong tremors over the past week, at a depth of 5.8 kilometres (3.5 miles).

Two powerful aftershocks of 6.4 and 6.6 magnitude were also recorded.

“Sea level readings indicate a tsunami was generated,” the Hawaii-based Pacific centre said. “It may have been destructive along coasts near the earthquake epicentre and could also be a threat to more distant coasts.”

Australia’s earthquake monitoring agency and the Pacific centre said a wave measuring three feet (90 centimetres) had been recorded at Lata, on the main Santa Cruz island of Ndende.

“We know that a tsunami has been created,” Geoscience Australia seismologist David Jepsen told AFP.

He said depending on the location of the quake, bigger waves could hit elsewhere.

“It’s a big earthquake anyway in terms of just the shaking,” he said. 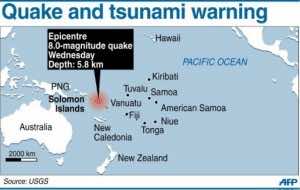 Locals in the Solomons capital Honiara, 580 kilometres (360 miles) from the epicentre, said the quake was not felt there, but some villages on the Santa Cruz islands were destroyed, according to a hospital director.

“The information we are getting is that some villages west and south of Lata along the coast have been destroyed, although we cannot confirm this yet,” the director of nursing at Lata Hospital told AFP.

“There was continuous shaking in Lata but no damaged buildings here,” he added.

The director, Augustine Bilve, said patients at the hospital were being evacuated to prepare for any injured from the villages along the coast.

“We were told that after the shaking, waves came to the villages. So far, we are waiting in Lata and are evacuating patients in case there are any casualties.”

A staff member at the Solomons National Disaster Management Office said officials were concerned about the eastern province of Temotu, which includes the Santa Cruz islands.

“That’s the province, which if it is going to have an effect, then they will be the first people to be impacted,” the official, who did not wish to be named, told AFP.

“They felt the quake.”

He added that the national disaster operation centre had been activated and officials in Honiara were trying to contact those in Temotu province.

In 2007 a tsunami following an 8.1-magnitude earthquake killed at least 52 people in the Solomons and left thousands homeless.

The Solomon Islands are part of the “Ring of Fire”, a zone of tectonic activity around the Pacific Ocean that is subject to earthquakes and volcanic eruptions.

Lower-grade tsunami watches were in place beyond those Pacific nations.

“At the moment there’s a tsunami watch in place for Indonesia, not a warning, so we’re monitoring very closely,” Meteorology, Climatology and Geophysics Agency technical chief Suharjono told AFP.

“If it does reach Indonesia, it would likely take a few hours to get here and would hit the area around Papua and other islands nearby.”