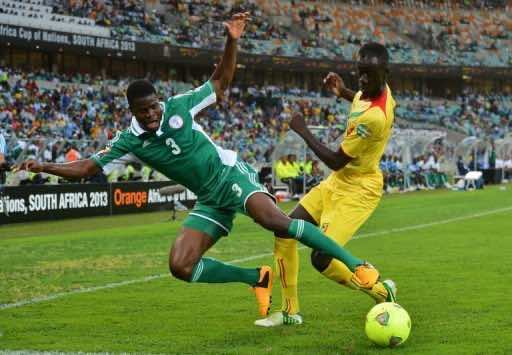 Nigeria qualified for the final of the 2013 Africa Cup of Nations after trouncing Mali 4-1 at Moses Mabhida Stadium on Wednesday.

The Super Eagles will face the winners of the other semi-final between Ghana and Burkina Faso, scheduled for Nelspruit at 1830GMT, this Sunday at Soccer City stadium in Soweto.

Nigeria took the lead on 25 minutes through a diving header inside the box by defender Elderson Echiejile off a low cross by Victor Moses from the right.

They doubled their advantage on the half hour when Brown Ideye finished off another low cross from the right, this time by Emmanuel Emenike.

Emenike netted his fourth goal of the tournament a minute before the break when his shot off an edge-of-box free kick took a deflection beyond goalkeeper Mamadou Samassa.

Substitute Ahmed Musa slotted home the fourth goal for Nigeria on 60 minutes when he burst clear.

Mali pulled a goal back in the 75th minute through substitute Fantamady Diarra, who slotted the ball past goalkeeper Vincent Enyeama as the Nigerian defence suffered a lapse in concentration.

Nigeria took the game to Mali from the first whistle with Chelsea winger Moses shooting wide after just two minutes.

However, Mali settled and came close to going in front after 12 minutes when Kalilou Traore’s header off a corner narrowly missed the target.

Nigeria carved a good chance on 15 minutes when Emenike fired at goal, but Samassa did well to keep it out before the ball was cleared for a corner.

Soon after Nigeria’s second goal by Ideye, the Dynamo Kyiv striker was denied by the young Mali goalkeeper, before Ogenyi Onazi’s chipped shot after a swift counter attack was held by back-tracking Samassa.

In the 47th minute, Seydou Keita’s shot from inside the Nigeria goal area missed as Mali searched for a goal. Molla Wague’s header in the 55th minute came close as Mali continued to pile pressure on the Super Eagles.

But Nigeria then created two good chances. First, Ideye hesitated when clear on goal in the 56th minute and a Musa effort that found the net seven minutes later was disallowed for offside.

Enyeama saved a low shot by Cheick Tidiane Diabate before Mahamadou Samassa had the easiest of chances to reduce the tally, but Enyeama kept him out.

Emenike let fly a powerful shot in the 87th minute, but his effort was wide of the target. In stoppage time, Diarra could have pulled another goal back twice but his efforts missed their mark.