The search engine giant Google celebrates the 100th anniversary of British archaeologist Mary Leakey who is famous for discovering the first fossilized “Proconsul” skull which according to Wikipedia belonged to “an extinct ape believed to be  ancestral to humans.”

Mary Leakey is celebrated with a doodle on Google’s home page depicting her working at an excavation site and surrounded by two Dalmatian dogs which she often had with her on digs. 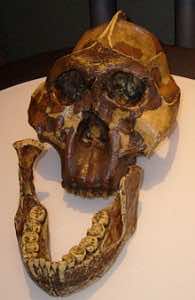 Leakey was born on February 6, 1913 in London, England and was an archaeologist and anthropologist.

For much of her career, she worked together with her husband Louis Leakey who was also an archaeologist in uncovering the tools and fossils of ancient hominids.

Mary has written four books on excavation, among which a book on her discovery entitled “Excavations at Njoro River Cave,” which was co-authored with her husband Louis.