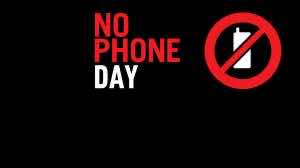 Today, February 6, coincides with the World Day without mobile phones and only few Moroccans took the action seriously as shown in a survey by 2M TV.

In a survey conducted by 2M TV today, many Moroccans expressed their close connection to their mobile phones.

Some of the interviewees said that they couldn’t go out without mobile phones because they rely on them to run their business and keep in touch with their relatives and friends.

Initiated by French writer Phil Marso, the action, which begins today, is being held for the 13th time and aims to reduce cell phone addiction by urging people not to use their mobile phones or decrease the number of conversations between February 6 and February 8.

Since 2001, the 6th of February was declared World Day without mobile phones by the French author Phil Marso.

The purpose of the action is to fight against “Nomophobia.”, a disease that is on the rise all over the world.

Nomophobia, an abbreviation for “no-mobile-phone phobia”, is the fear of being out of mobile phone contact.

The third generation mobile phones, called smart phones, are no longer simple devices by which one makes and receives only phone calls. They provide endless services and applications that can be used for work or entertainment.

With regard to the number of mobile phone users in Morocco, the number currently stand at 38.3 million for a population of barely more than 32 million as of the end of September 2012.

It is noteworthy that Moroccans spend too much money and time on call conversation. Abdel Kadir Amara, the Minister of Industry, Trade and New Technologies, said that Moroccans spent more than 30 billion minutes on the phone in 2012.