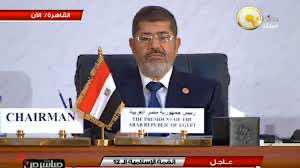 In his opening speech to the chairman of the Organization of Islamic Countries (OIC) summit on Wednesday, Egyptian President Mohammed Mursi, Palestinian leader Mahmoud Abbas made a blunder, when he said “Mohamed Hosni.”

Mistaking Egypt’s current President’s last name to that of the toppled Hosni Mubarak did not deter Abbas from correcting himself and then continuing with his speech nor did it seem to affect the Mursi’s demeanor.

However, there were smiles on some of those present at the summit.
This is not the first time this has happened.

Egypt’s Information Minister, Salah Abdulmaksood, said in one of his TV interviews that he is following the directions of President “Hosni Mubarak.”

Another fatal mistake was when the Justice and Freedom party, the political arm of the Muslim Brotherhood, which Mursi belongs to, erred when it wrote the former Egyptian president’s name in an article after Mursi has been elected.

Mursi is Egypt’s first democratically elected president after the ouster of Mubarak in 2011.