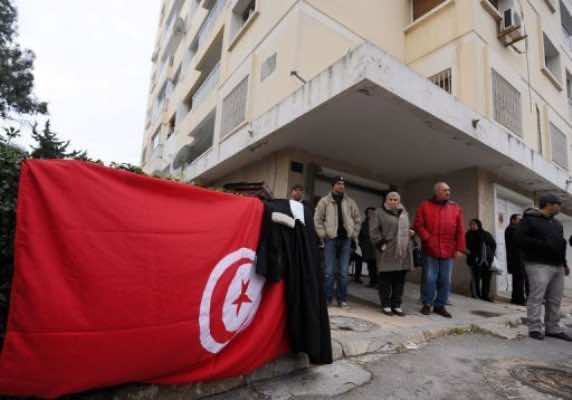 Tunisia’s premier has pledged to form a government of technocrats ahead of new elections, after the murder of opposition leader Chokri Belaid sparked deadly protests and attacks on the ruling party’s offices.

Furious demonstrators built barricades in central Tunis on Wednesday and clashed with police, and four opposition groups including Belaid’s Popular Front bloc said they were pulling out of the national assembly.

One policeman was killed after being hit on the chest by rocks in Tunis, the interior ministry said, while an ambulance carrying Belaid’s body to the city centre was accompanied by crowds who pressed against the vehicle to protect it.

Islamist Prime Minister Hamadi Jebali said in a televised address after Belaid was shot dead outside his home in Tunis Wednesday that he would form a new, non-political administration ahead of fresh elections.

“I have decided to form a government of competent nationals without political affiliation, which will have a mandate limited to managing the affairs of the country until elections are held in the shortest possible time,” he said.

Jebali did not specify that he was dissolving the existing government, nor did he set a date for the reshuffle which must be confirmed by the national assembly.

President Moncef Marzouki denounced the killing of Belaid, an outspoken critic of his government, as an “odious assassination”.

The ruling Islamist Ennahda party, which Belaid’s family accused of being behind the killing, rejected any involvement.

Ennahda chief Rached Ghannouchi said that the “cowardly” murder was the result of a settling of political scores. The killers “want a bloodbath but they won’t succeed,” he told AFP.

The four opposition groups blamed Interior Minister Ali Laraydeh from Ennahda for Belaid’s murder and demanded his sacking “because he knew he was threatened and he did nothing,” according to Nejib Chebbi, leader of one of the blocs.

Belaid’s Popular Front and other opposition parties called for a general strike to protest against the assassination.

The United States led Western nations who reacted with dismay at the killing, while Human Rights Watch said the authorities should ensure those responsible were brought to justice.

“There is no justification for an outrageous and cowardly act of violence like this. There is no place in the new Tunisia for violence,” US State Department spokeswoman Victoria Nuland said.

German Foreign Minister Guido Westerwelle expressed his “horror” at the attack while French President Francois Hollande condemned a murder that “robs Tunisia of one of its most courageous and free voices.”

The violent scenes triggered by Belaid’s murder were reminiscent of the uprising that ousted veteran dictator Zine El Abidine Ben Ali just over two years ago, with thousands protesting outside the interior ministry.

Belaid’s brother, Abdelmajid, bluntly accused the Ennahda chief of the murder of the 48-year-old leftist leader, who headed the Party of Democratic Patriots, part of the Popular Front.

The slain politician’s wife said her husband had received daily death threats and was murdered before her eyes.

“I saw his blood flowing, I saw his little smile. I saw that they want to kill democracy,” Basma Belaid told France’s Europe 1 radio.

Belaid had last week accused Ennahda “mercenaries” of attacking his supporters and on Tuesday warned that militias were being created “to terrorise citizens and drag the country into a spiral of violence.”

His supporters flooded the streets of Tunis and other cities, including Sidi Bouzeid, birthplace of the 2011 revolution, where tear gas was fired as about 200 people tried to storm the police headquarters.

Protesters torched the Ennahda office near Sidi Bouzeid, ransacked another in Gafsa and set fire to a party office in the northeastern town of Kef.

In Kasserine, on the border with Algeria, hundreds of people calling for “vengeance” took to the streets.

Marzouki deplored the killing in an impassioned speech at the European Parliament.

“This odious assassination of a political leader who I knew well and who was my friend… is a threat, it is a letter sent that will not be received,” he said, insisting the murder would not plunge Tunisia into violence.

Belaid, whose funeral will be on Friday after the main weekly prayers, was a populist known for his iconic smile and black moustache.

A lawyer who spoke with the working class accent of northwestern Tunisia, he defended human rights, was jailed under Ben Ali, and was a member of executed Iraqi dictator Saddam Hussein’s legal defence team.