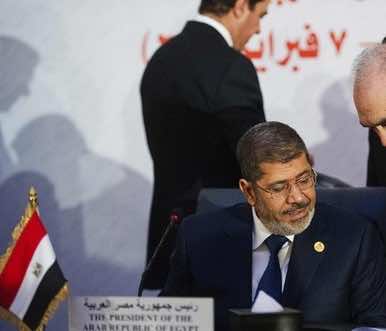 Egyptian President Mohamed Morsi said on Thursday he hoped for a ceasefire “soon” in Syria, where tens of thousands of people have been killed in nearly two years of conflict.

Morsi said a meeting between Egypt, Turkey and Iran on the sidelines of a Cairo summit of the Organisation of Islamic Cooperation (OIC), discussed “the general framework” to resolve the crisis in Syria.

“The most important point now is to end the bloodshed. There must be a ceasefire immediately: this is a key point which could perhaps be soon, God willing,” Morsi said at a news conference with his Turkish counterpart Abdullah Gul.

“The foreign ministers are working on transforming this general framework into principles and measures” which will be announced “in the coming days within an Arab, Islamic and international framework,” he said.

The OIC called for a peaceful resolution to the Syrian conflict through “serious dialogue” between the regime and its foes, at the summit.

The summit was held in the absence of Syria which the 57-member OIC suspended in August last year because of the bloody crackdown on protests against President Bashar al-Assad’s regime.