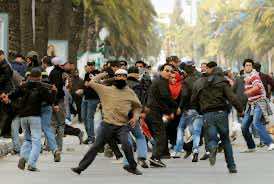 The United States on Thursday urged Tunisian leaders to come together to resolve the tensions wracking the country, warning “there’s no place for violence in Tunisia’s democracy.”

Washington has condemned the assassination of leftist opposition leader Chokri Belaid, who was gunned down Wednesday outside his home in Tunis, sparking clashes between police and hundreds of protesters.

“There’s no place for violence in Tunisia’s democracy. It won’t resolve the issues that Tunisians face, and it’s not an appropriate response to murder.

Police on Thursday deployed in force in Tunis and fired tear gas, amid fears the murder could reignite nationwide violence.

Belaid’s family has accused the ruling Islamist Ennahda party of being behind the killing — charges it vigorously denies.

Prime Minister Hamadi Jebali, who hails from Ennahda, said in a televised address on Wednesday that in the wake of the crisis he would form a new administration of non-political technocrats ahead of fresh elections.

But his proposal has split the Ennahda party, with a bloc of MPs rejecting the idea, furthering the political confusion.

Nuland said it was “up to Tunisia’s leaders to decide how to take the country forward, but we also encourage Tunisia’s citizens, their political leaders, to continue to work together to find consensus so that the constitution can be completed quickly.”