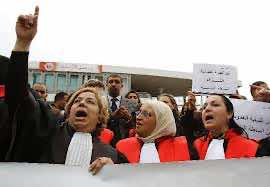 Judges and lawyers began a two-day strike Thursday in protest at the murder of Chokri Belaid, himself a trained lawyer, and vented anger at Tunisia’s ruling Islamist party’s perceived interference in the judiciary.

At the court of first instance in Tunis, men and women dressed in black robes chanted the national anthem at the top of their voices before angrily denouncing the assassination of Belaid, who was a virulent critic of Ennahda.

“To the terrorists who killed Chokri, we say that we are not afraid,” shouted barrister Chaouki Ettabib, to the applause of colleagues in the lobby of the court house.

Fiery speeches, sadness and mourning marked the event, together with a key demand.

“The people want an independent judiciary,” they shouted, in what has become a rallying cry.

“The judicial sector is experiencing a deep malaise. Since the revolution of January 14, 2011, the authorities have blocked the reforms needed to guarantee the independence of the judiciary,” lawyer and human rights activist Mokhtar Trifi told AFP.

He accused the Islamist-led government of wanting to control the judiciary, as was the case under the regime of former dictator Zine El Abidine Ben Ali.

“The independence of the judiciary seems like a mirage,” agreed Imen Ayat, another lawyer, who charged that Justice Minister Noureddine Bhiri of Ennahda”only served the interests of his party.”

“What is happening now is worse than under the Ben Ali regime,” added her colleague, Anas Ben Malek.

Wearing a red armband in a gesture of protest, the president of the judges association Kalthoum Kanou, who was persecuted under Ben Ali, said many of Tunisia’s judges remained independent, “unlike the prosecution, which is all under the control” of the executive.

But she said some judges who served under the former regime “have received promotions,” in exchange for their loyalty.

The strike was called for Thursday and Friday by the council of the bar, the association of judges and the public prosecution union, the day after Belaid was shot dead at close range by a lone gunmen as he was leaving his  house.

“I know that there is no serious will by the government to put in place an independent body, but these strikes will not achieve anything,” said another judge, one of a minority refusing to follow the strike.

“All executive powers want to dominate the judiciary,” he told AFP, speaking on condition of anonymity.

The creation of an independent body tasked with overseeing the judiciary awaits the passing of a law in the national assembly which has been endlessly delayed.

Meanwhile, the courts in Tunisia have been largely idle since the mass uprising just over two years ago, and numerous sensitive case remain unresolved as they are deferred from one hearing to another.

Tunisia’s lawyers, who were a key force in the revolution, have joined protests around the country since Wednesday.