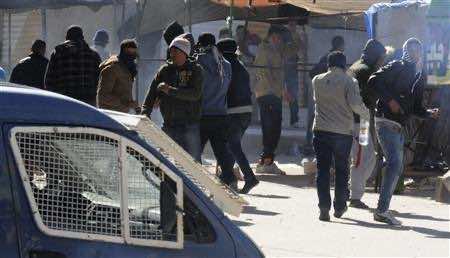 A Tunisian policeman was in a coma on Friday after being beaten by protesters who also set fire to a police station in the central Tunisian town of Gafsa, police and medics told AFP.

Walid Marzouki was violently dragged out of his car and beaten by a crowd of angry youths. He was taken to Gafsa hospital’s intensive care unit and had fallen into a coma, the officials said.

Clashes erupted in Gafsa on Thursday, after the killing of leftist opposition leader Chokri Belaid, with protesters throwing petrol bombs at the police, who fired large quantities of tear gas in a bid to disperse them.

The protesters also torched a police station in the volatile central mining town, after the security forces withdrew following the clashes.

Tunisia has been rocked by clashes and strikes since Belaid was shot dead in broad daylight early on Wednesday, with violence in Tunis also leaving one policeman dead.