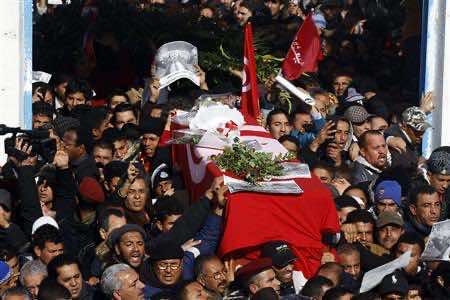 Thousands flocked onto the streets of Tunisia’s capital Friday for the burial of a slain opposition leader whose murder plunged the country into a political crisis and fresh post-revolution violence.

Around 3,000 mourners gathered outside a public building in Tunis’ southern suburbs of Djebel Jelloud where Chokri Belaid’s coffin lay covered in flowers ahead of the afternoon burial.

The Tunisian capital was at a near standstill amidst a general strike called by the North African country’s biggest union to protest his murder, blamed by the opposition on the ruling Islamist party, Ennadha.

Streets were deserted, shops shut and public transport at a minimum. The city’s international airport was shut down and airport authorities said all flights to and from the capital were cancelled.

The army deployed vehicles and troops along Habib Bourguiba Avenue, the epicentre of the 2011 revolution that toppled autocratic president Zine El Abidine Ben Ali and sparked a wave of uprisings across the Arab world.

One of Belaid’s daughters fainted in chaotic and emotional scenes as the funeral cortege prepared to set off in procession to the cemetary.

“With our blood and our souls we will sacrifice ourselves for the martyr,” shouted the mourners, who included prominent politicians. They also chanted slogans denouncing the Ennahda party as “assassins”.

Belaid — an outspoken critic of Ennahda, one of the region’s most powerful Islamist movements — was shot dead outside his home Wednesday by a lone gunman.

The 48-year-old leftist politician was to be buried after weekly prayers in the Muslim country, whose long-established secular tradition has been countered by Ennahda’s rise.

The strike called by the powerful General Union of Tunisian Workers (UGTT) is expected to be the biggest since January 14, 2011 — the day that Ben Ali fled to Saudi Arabia.

Both the 500,000-strong UGTT and the government appealed for calm following two days of clashes between opposition supporters and police in Tunis and several other cities sparked by outrage at the assassination, as months of simmering tensions between liberals and Islamists they accuse of stealing the revolution, boiled to the surface.

The interior ministry called on Tunisians “under the exceptional circumstances facing the country, to respect the right to work, the right to strike and to avoid anything that could undermine public security.”

The violence has left a police officer dead and scores injured. Another police officer was in a coma on Friday after being beaten by protesters who also set alight a police station in the central mining town of Gafsa, officials said.

Prime Minister Hamadi Jebali, from the Ennahda party, responded to the outrage by saying he would form a new government of technocrats, but a bloc within the party has rejected the move, deepening the crisis.

Any reshuffle would have to be confirmed by the national assembly.

The United States has urged Tunisian leaders to come together to resolve the mounting tensions and called for calm.

“There’s no place for violence in Tunisia’s democracy,” US State Department spokeswoman Victoria Nuland said. “It won’t resolve the issues that Tunisians face…. It’s only going to bring more violence.”

Tunisian lawyers, judges and some teachers had already started a strike on Thursday. Courtrooms stood empty at the main courthouse in Tunis.

Four opposition groups including Belaid’s Popular Front bloc said they were pulling out of the National Constituent Assembly, elected in October 2011 but which has failed to draft a new constitution.

The Tunisian League for Defence of Human Rights said threats and intimidation were continuing under the Ennahda-dominated government, and called for the protection of political figures.

Pro-Ennahda militias have been accused of organising attacks on secular opposition groups already at loggerheads with Ennahda over the constitution.

Ennahda vigorously denies charges by Belaid’s family that it was behind his killing.

Jebali is considered a moderate within his party and has for months been locked in negotiations with the secular parties in the coalition who have demanded that some ministries be assigned to independents, a move rejected by Ennahda hardliners.