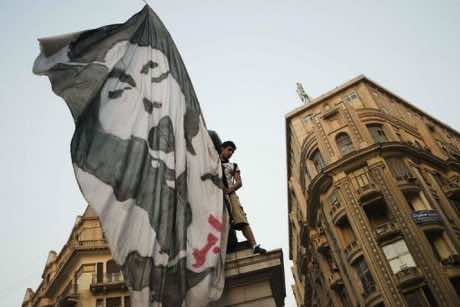 Thousands took to the streets after opposition groups called for “Friday of dignity” rallies demanding Egyptian President Mohammed Morsi fulfill the goals of the revolt that brought him to power.

Banging on drums, waving flags and clapping in unison, demonstrators marched from several locations in the capital towards Tahrir Square and the presidential palace.

“The people want the downfall of the regime,” the protesters chanted while others slammed interior ministry officials as “thugs”.

Protests against the Islamist president have also been organized after the weekly Friday Muslim main prayers in several of Egypt’s 27 provinces.

Thirty-eight opposition parties and movements have called for the rallies, demanding a new unity government, amendments to the Islamist-drafted constitution and guarantees that the independence of the judiciary be maintained.

Earlier this week, the death of a pro-democracy activist following days in police custody sparked fury and reignited calls for police reform — a key demand of the uprising that toppled Hosni Mubarak in 2011.

His death came just days after footage was aired live on television of a man stripped naked and beaten by riot police during demonstrations near the presidential palace.

The two incidents confronted Morsi with uncomfortable parallels with the old regime.

Security was stepped up outside the homes of ElBaradei and Sabbahi ahead of the protests, witnesses told AFP, following orders from the interior minister.

The presidency condemned the fatwas as “terrorism”.

“Some are promoting and inciting political violence while others who claim to speak in the name of religion are permitting ‘killing’ based on political differences and this is terrorism,” the presidency said.

In recent months, Egypt has witnessed regular, often bloody, protests against Morsi who is accused of betraying the revolution that toppled Mubarak.

Opponents have criticized him of using his power to promote the interests of his Muslim Brotherhood, long banned under his predecessor.

The country has been deeply divided between Morsi’s mainly Islamist supporters and an opposition of liberals, leftists, Christians but also deeply religious Muslims calling for rights and the separation of religion and state.