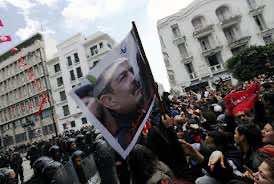 A sea of mourners, some wailing in grief as others angrily denounced the government, followed the coffin Friday of slain opposition leader Chokri Belaid, whose funeral became a mass protest against Tunisia’s ruling Islamists.

From early morning, thousands of people gathered under a wet winter sky to pay their last respects to Belaid, many carrying pictures of the charismatic human rights lawyer and outspoken government critic.

The white walls round the building were painted with an enormous black moustache, the trademark feature of a leftist politician whose impassioned anti-Islamist stance was given a public platform by media after the revolution.

The cries of women rang out in the streets along with slogans denouncing Ennahda, the Islamist party that heads the ruling coalition and which Belaid’s relatives blame for his assassination early on Wednesday by a lone hooded gunman.

“Get out! Get out!” — the famous rallying cry during the 2011 uprising that unseated former dictator Zine El Abidine Ben Ali — was another slogan chanted by the crowd, which also took up Tunisia’s new national anthem.

“Oh defenders of the nation, let us go to meet our glory, let us die if we must that the country lives, proclaims the blood that flows in our veins,” they sang.

Among the demonstrators, Belaid’s widow Besma held two fingers in the air in the victory sign, as his eight-year-old daughter fainted in chaotic and emotional scenes as the funeral cortege prepared to set off.

Belaid’s coffin was then carried by military truck on its final three and a half kilometre (two-mile) journey to El-Jellaz cemetery, followed by tens of thousands of people, in what was believed to be the biggest protest since the revolution.

Stony-faced soldiers with automatic weapons slung over their shoulders lined the streets, as helicopters flew overhead.

A throng of mourners jostled for space with news photographers around the grave before the burial.

As Belaid was laid to rest at around 1500 GMT, thousands of people cried “Allahu akbar!” (God is greatest) before singing the national anthem and reciting the opening verse of the Koran.

Army chief of staff Rachid Ammar was the only official present at the cemetery, after Belaid’s family asked that government representatives stay away. By contrast, members of different secular opposition parties turned out in force.

“We lost a great hero, he was a hero for all Tunisians,” said Beji Caid Essebsi, the centre-right opposition leader who served as interim prime minister in the aftermath the revolution.