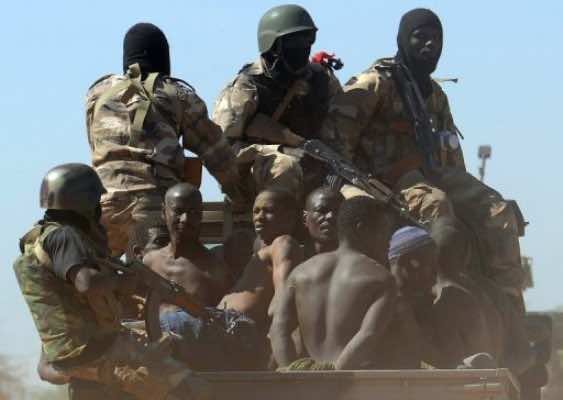 A suicide bomber blew himself up in northern Mali on Friday as a dramatic turn towards guerrilla tactics by Islamists and an outbreak of fighting among soldiers in the capital show the war is far from won for the embattled nation.

In Mali’s first ever suicide bombing, an attacker drove up to a group of Malian troops in Gao, the largest town in the north, and detonated an explosive belt, wounding one soldier, said First Sergeant Mamadou Keita.

The Islamists who occupied northern Mali for 10 months have resorted to guerrilla warfare after being ousted by French-led troops who on Friday took control of the strategic town of Tessalit near the Algerian border.

Many of the rebels are now believed to be holed up in the remote hills of the far northeast.

In the capital Bamako infighting in Mali’s deeply divided military erupted as soldiers attacked a camp of elite paratroopers loyal to ex-president Amadou Toumani Toure, who was ousted in a March coup.

The putsch was launched by soldiers from Mali’s poor and ramshackle army after their humiliation in the north at the hands of well-armed rebels fighting for independence for the Tuareg, a northern people who have long complained of being marginalised by Bamako.

Friday’s gunfight broke out after the paratroopers refused to be absorbed into other units and go to the northern frontline.

“From 6:00 am (0600 GMT) heavily armed soldiers, from all units, attacked the camp,” said Yaya Bouare, one of the “Red Beret” soldiers inside the camp, adding that there were many wounded.

The violence came on the day the first EU military trainers were due in Bamako to try to whip the Malian army into shape to face the Islamists.

With Bamako in disarray after the coup, Al-Qaeda-linked fighters hijacked the Tuareg rebellion and took control of the north, imposing a brutal form of Islamic law.

France launched a surprise intervention on January 11 in its former colony as the insurgents advanced towards the capital, raising fears the entire country could become a sanctuary for Al Qaeda-linked groups.

France is anxious to hand over the operation to UN peacekeepers amid fears of a prolonged insurgency, which will likely be amplified by Friday’s bombing.

The bomber, a young Tuareg, was also carrying a larger bomb that failed to detonate, Keita said.

The suicide attack came a day after one of the Islamist groups, the Movement for Oneness and Jihad in West Africa (MUJAO), said in a message to AFP that it had “created a new combat zone” by organising suicide bombings, attacking military convoys and placing landmines.

A landmine blast on Wednesday between the northern towns of Douentza and Gao killed four civilians returning from market, a paramilitary police officer said, after a similar incident in the same area on January 31 killed two Malian soldiers.

French-led forces continue to come under attack in reclaimed territory, including rocket fire in Gao on Tuesday.

French-led forces have so far routed the extremist fighters from their former strongholds, and French and Chadian troops on Friday pushed deeper into the Adrar des Ifoghas massif in the far northeast.

French and Chadian troops arrived Thursday in Aguelhok, 160 kilometres (100 miles) north of regional capital Kidal, before moving on Friday to Tessalit, a strategic oasis town near the Algerian border.

Both towns have been targeted with repeated air strikes over the past few days aimed at knocking out Islamist bases, the French army said, adding that French troops were now in control of Tessalit.

— ‘Our concern is that they may come back’ —

UN leader Ban Ki-moon on Thursday expressed concern at the risk of a guerrilla fightback.

“All these jihadis and armed groups and terrorist elements — seemingly they have fled,” he said. “Our concern is that they may come back.”

After announcing plans to start withdrawing its 4,000 soldiers in March, France on Wednesday called for a UN peacekeeping force to take over.

But Ban warned it would take weeks for the UN Security Council to decide the international community’s next move, and UN officials stressed that Mali’s interim government had yet to accept a UN force.

The Economic Community of West African States (ECOWAS) is slowly deploying 6,000 troops in Mali, joined by another 2,000 from Chad.

In a television interview aired Friday, a former US ambassador to Mali said France and other European countries had channelled millions of dollars in ransom payments to the Al Qaeda-linked militants the French troops are now fighting.

Vicki Huddleston said France had paid $17 million to free French hostages seized from a uranium mine in its former colony Niger in 2010.

She said as much as $89 million could have been paid out by European countries between 2004 and 2011.