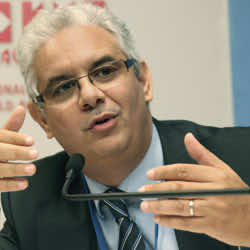 The minister who presented preliminary results of the Morocco economy in 2012 said this growth was achieved thanks to a 4.6pc positive growth of the GDP –excluding agriculture -, despite the recession and the growth decline in the Euro Zone countries, he explained at a joint press conference with budget minister, Driss El Azami El Idrissi.

He added that the decline in growth rate from 5 pc in 2011 is the result of a regression of the agricultural added value, due to low rainfalls, a cold spell in the kingdom in 2011 and a slump in harvest.

He said however, this evolution is satisfying compared to some countries of the region (Middle East and North Africa.

Regarding inflation which he estimated at 1.3pc in 2012, he said “non-food inflation remained around 0.6 pc despite the hike in some energy products during June, adding that the budget deficit stood at 7.1 pc of the GDP due to external effects of the hike of raw material and energy products prices.

Meanwhile, receipts of foreign direct investments progressed by 14pc in 2012, compared to a regression of 26.9 pc in 2011, said El Azami who insisted on the need to maintain the exchange rate of the Moroccan currency against the US dollar, in order to preserve the financial situation of public accounts.

He also mentioned the deficits of the balance of payments and of the trade balance, due to an adverse international context.