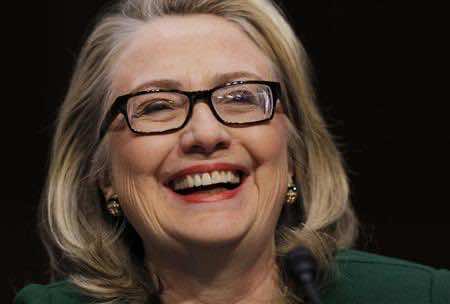 Sixty-one percent of American voters approve of Clinton, a possible U.S. presidential candidate for 2016, while 34 percent said they had an unfavorable opinion, according to the survey by Quinnipiac University released on Friday.

The poll comes one week after Clinton left her post as the nation’s top diplomat. Clinton, 65, has said she does not see herself going back to politics but left open the possibility of such a return.

In comparison, 51 percent said they held a “favorable” opinion of Obama while 46 percent had an unfavorable opinion. For Biden, 70, another potential 2016 contender, 46 percent gave him good marks compared to 41 percent who did not.

Peter Brown, assistant director of the Quinnipiac University Polling Institute, said the results show that after a positive burst for Obama following his re-election in November, the United States is quickly returning to partisan politics.

“The lower approval numbers for the president could be because once the election afterglow is gone, governing inevitably requires decisions that make some voters unhappy,” he said, adding that Clinton won over more independents and Republicans.

Leading Republicans, including rising star Marco Rubio, a first-term senator from Florida, saw favorable opinions from one-third or fewer of those surveyed.

The poll found 27 percent held a favorable view of Rubio, 41, who could also be a player in the 2016 election. Fifteen percent held a negative view and 57 percent said they did not know enough about him.

Many respondents – 45 percent – also said they did not know enough about former Florida Governor Jeb Bush.

About 20 percent of those polled said they had a good opinion of House Speaker John Boehner, and 24 percent said they saw former Republican vice presidential candidate and U.S. Representative Paul Ryan positively. About one-third of voters said they did not know enough about either Republican. Obama will deliver the annual State of the Union address on Tuesday.