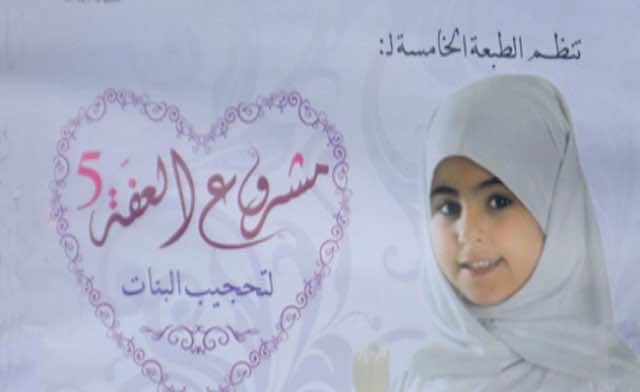 An Islamic group in Algeria has mobilized an army of sociologists, psychologists and religious preachers from inside and outside the country in a campaign urging girls as young as 10-years old to wear the religious headscarf, a moved decried by rights activists as irresponsible and counterproductive.

Hisham Ben Khouda, secretary general of ‘al-Daawa’ group behind the “chastity” campaign, told Algeria’s Echorouk newspaper that his group has managed to convince 300 girls between the ages of 10 and 15 to wear the veil. He said the campaign has been going on for five years and that this year it has taken a national dimension with the participation of many preachers from inside and outside Algeria.

Radical Kuwaiti preacher Nabil al-Awadhi is scheduled to attend the ‘chastity’ ceremony on April 12 in Algeria’s el-Boulaida where the Islamic headscarf will be introduced to little girls who are “convinced” by preachers, sociologists and psychologists to wear it.

The Kuwaiti preacher, in a recent visit to Tunisia, called on young girls to wear the hijab, raising anger among human rights activists in the once secular North African state.

Awadhi said he was in Tunisia to deliver “educational lessons,” but activists and even lawmakers in the constituent assembly urged the government to expel him.

Organizers of the ‘chastity’ campaign in Algeria say girls are asked to fill out an application answering questions regarding their understanding of Hijab. They also changed the targeted age group from 8-12 to 10-15 based “specialists’ advice.”

Yousif Hantablawi, a sociologist at Boulaida University, criticized the campaign saying it will have negative effects on little girls. He said minors cannot make such life-changing decisions and the campaigners cannot claim to have “convinced” any girl.

Djaâfri Djadi Chayaa, the president of the Algerian Observatory of Women, told Echorouk that the project will hurt the girls more than it will benefit them, adding that campaign should’ve tried to educate the girls and teach them social values and proper behavior instead of encouraging them to change their looks by wearing the hijab.

In Saudi Arabia, a religious preacher recently called for all female babies to be fully covered by wearing the face veil, commonly known as the burka, citing reports of little girls being sexually molested.

In a TV interview on the Islamic al-Majd TV, which seems to date back to mid-last year, Sheikh Abdullah Daoud, stressed that wearing the veil will protect baby girls. The Sheikh tried to back his assertion with claims of sexual molestation against babies in the kingdom, quoting unnamed medical and security sources.