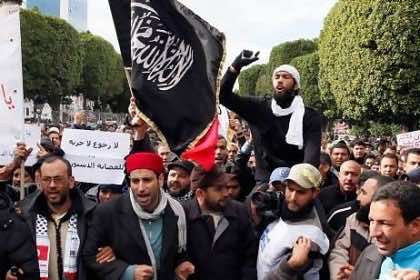 Members of Tunisia’s main ruling Islamist party called for a rally in the capital on Saturday, a day after police clashed with protesters at the funeral of murdered opposition figure Chokri Belaid.

The Ennahda party demonstration was to take place in the center of Tunis on Habib Bourguiba Avenue, where the latest violence has taken place, the party said in a statement.

The protest would “defend the legitimacy of the national constituent assembly,” where the Ennahda-dominated coalition holds a majority, and would “fight against (the political) violence” it said the opposition is using.

Tens of thousands of protesters took to the streets on Friday for the funeral procession of Belaid, who was killed by a lone gunman on Wednesday, and clashes with police led to 132 arrests, said the interior ministry.

The opposition blames Ennahda for the murder of the outspoken government critic, but the ruling party vehemently denies any involvement.

The unrest comes amid tension and division within Ennahda itself, after the recent sacking of the party’s leader and as Prime Minister Hamadi Jebali attempts to form a new government of technocrats, which hardliners oppose.