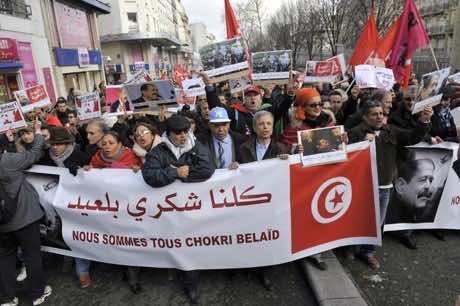 Thousands of people protested in central Tunis on Saturday shouting pro-Islamist and anti-French slogans, a day after the funeral of a murdered opposition figure became a mass rally against the ruling Islamist party.

“France get out!” and “The people want to protect the legitimacy” of the government were among slogans chanted by Ennahda party supporters who numbered more than 3,000, AFP journalists estimated.

“Enough, France! Tunisia will never again be a French colony,” proclaimed some of banners waved by protesters.

The party called the protest to “defend the legitimacy of the national constituent assembly,” in which the Ennahda-dominated coalition holds a majority, to fight “against (political) violence” and “French interference.”

The anti-French slogans came in response to comments by French Interior Minister Manuel Valls, who denounced what he called “Islamist fascism” after Chokri Belaid, an outspoken critic of the Islamists, was shot dead outside his home on Wednesday.

The opposition has blamed Ennahda for the killing, a charge it vehemently denies.

Belaid’s assassination has plunged Tunisia into new post-revolt turmoil, with tens of thousands of protesters taking to the streets on Friday for his funeral, chanting anti-Islamist slogans.