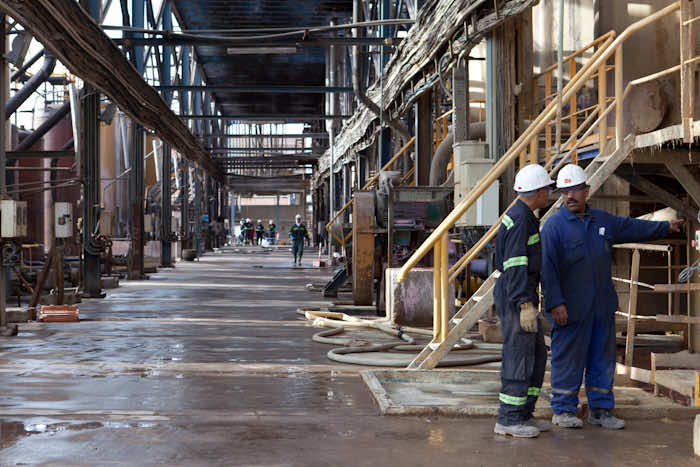 The Moroccan Managem mining Company plans to launch Sudanese biggest gold mine of Atbara on 21st February, Funded by The Royally-owned holding, Societe Nationale des Investissements, known by its French as SNI, at a cost of $450 million USD.

An Australian consultant told Morocco World News that Managem expected to produce 10 tonnes of gold a year within four years. The company, which currently has another exploration and gold deposit projects in Sudan, has recently completed a financial feasibility study on the Wadi- Gigiya project which identified a resource of around 4 million ounces of gold, 60% of which in the measured category.

The study was conducted internally by Reminex-Managem holding, a Managem affiliate that specializes in geology, with the assistance of the Geostat Systems International, a leading Canadian company specializing in geo-stastics and resource estimation.

The Capital expenditures needed to develop the gold pilot project -which has been operating since February 2011-, was estimated at $185 million. The Moroccan mining group hopes to finance most of that sum from its own coffers and the rest with bank loans.

To finance the investment’s programme, Managem intends to use the latest capital increase, as well as the cash generated by the SMI’s activities, in addition to further debt financing.

Viability is also the watchword in the long-term for mining operations in Morocco in the wake of the liquidation of highly costly hedging contracts with France’s Société Générale and Rothschild in gold and silver in the early 2000s.

The feasibility study is on the verge of being completed and Managem is also expected to approach bankers in the Gulf to top up the funding. According to the Oxford Business Group annual report, the total of Managem’s investment in Sudan is around of 1,218 Billion USD.

Abdellaziz Abarro, Managem’s Chief Executive Officer, aims to unlock enough profits to make the group’s international operations autonomous of the parent company, which has been managed for some years by the Swiss-based Managem International -former Manatrade AG based in Baar Zug- run by Jawad Benkhadra.

This project in Sudan is expected to be followed by the inauguration of Pumpi in Kolwezi (the Katanga Province in the Democratic Republic of the Congo), a copper and cobalt prospect (respectively 600,000 tons and 150 tons) which is 75% owned by Managem and 25% by Costamin, a Congolese company headed by Gabriel Madua Masudi.

The mining arm of SNI, the Moroccan leading holding group, Managem international has been growing and is spreading its wings successfully across Africa. After putting the Bakoudou gold mine in Gabon into production last year, the firm wants to swiftly develop its projects in Sudan and Democratic Republic of Congo. The objective is to attain critical mass for its operations outside of Morocco.

Youssef Otmane is a journalist and columnist based in Casablanca.