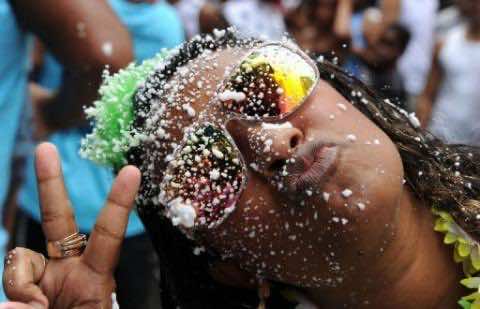 Hundreds of thousands of beaming revelers in outlandish costumes poured into central Rio Saturday for wild merrymaking and beer drinking on day two of the world’s most famous Carnival.

This year organizers expect 2.4 million, with tourism officials saying Guinness World Records representatives were on hand to check whether the 95-year-old street bash can qualify as the globe’s biggest.

Black polka dots on white are the trademark style for Bola Preta (black ball) fans since, according to city lore, the bloco’s name was inspired by a stunning, curvy woman in a polka dot dress.

“I come every year. The more people the merrier,” said Luiz Ornellas, a 25-year-old student disguised as a clown.

The parade got under way a day after the legendary King Momo officially declared the start of the 2013 Rio Carnival after symbolically receiving a giant key to the city from Rio Mayor Eduardo Paes.

Carnival is hugely popular throughout Brazil and, as is customary, Salvador led the way Thursday night, with hundreds of thousands of people partying in the streets of the Bahia state capital and heart of Afro-Brazilian culture.

This year, Brazilians are paying a special tribute to South Korea to mark the 50th anniversary of Korean immigration to the country.

Samba schools in Rio and Sao Paulo are honoring the contribution the 50,000-strong Korean community has made to this vibrant and racially diverse country of 194 million people.

The rapper wowed his audience with his “Gangnam Style” hit — featuring his signature horse-riding dance — that made Internet history last December by clocking more than one billion views on YouTube.

Sao Paulo, the country’s most populous city and economic capital, kicked off its elaborate Carnival parades Friday, with a tribute to popular sambista Beth Carvalho, who is in hospital recovering from spine surgery.

With colorful fantasy floats and elaborate costumes, other samba schools highlighted Sao Paulo’s rich ethnic and racial diversity, recounted the story of wine and celebrated the world’s other major festivals such as the Venice Carnival, New Orleans Mardi Gras or Mexico’s Day of the Dead.

On Rio’s streets Saturday, Bola Preta fans strutted along in a variety of eccentric costumes. Spotted in the crowd was a President Barack Obama figure waving a flag proclaiming “I am the Man,” while another reveler was decked out as the late Michael Jackson.

The joyful merrymaking came on the eve of Rio’s eagerly-awaited parades of richly decorated floats and scantily-dressed samba queens at the Sambodrome parade ground designed by the late Oscar Niemeyer.

Some 12 elite samba schools are vying for the title of Carnival champion in a fiercely contested showdown watched with the same fervor as football matches in this soccer-mad nation.

While the Sambadrome parades are the highlight of the Rio Carnival, they attract mainly the wealthy and foreign tourists.

The blocos, by contrast, are open to all, attracting the rich and poor from all city districts and neighboring towns.

Authorities said six million people, including more than 900,000 tourists, were expected to attend some 492 street parties during the five-day Rio extravaganza.

The Marvelous City, which will host next year’s World Cup and the 2016 Summer Olympics, has mobilized 14,500 police offiers to provide security.

For many Brazilians, the celebrations are a chance to forget the January 27 nightclub fire in the southern college town of Santa Maria that left 239 young people dead.

The tragedy prompted authorities to step up safety inspections at entertainment spots nationwide.