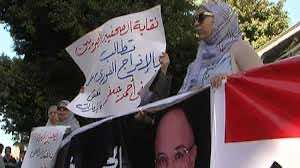 Egyptian detainees held in the UAE over suspected links with President Mohamed Morsi’s Muslim Brotherhood are being
treated “well” in the Gulf country, Cairo’s envoy said on Sunday.

“The Egyptian detainees are being treated well in accordance with the UAE laws,” Emirati state news agency WAM quoted Egypt’s ambassador to Abu Dhabi Tamer Mansur as saying, adding that they were receiving proper medical care.

“None of the detainees who are being interrogated has been subjected to any psychological or physical pressure,” he added.

Last month, local media reported that UAE authorities had arrested 11 Egyptians residing in the country on suspicions of links to the Brotherhood.

The case has sparked a sharp deterioration of relations between Abu Dhabi and Cairo which were already under strain since Brotherhood candidate Morsi’s election as president last June.

Mansur said that the detainees have been allowed to contact their families by telephone.