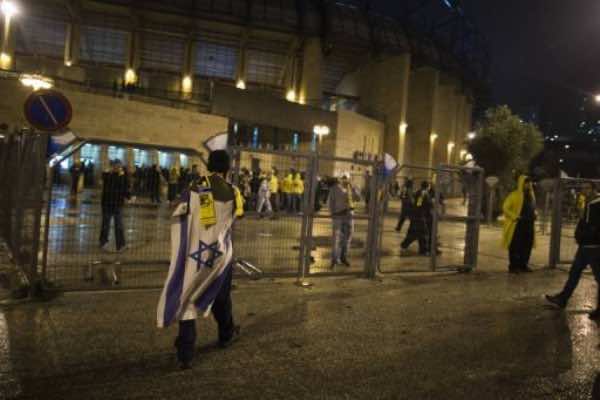 More than 600 Israeli police deployed on Sunday outside Jerusalem’s Teddy stadium to contain possible racist protests by football supporters during a visit by an Arab team, a security spokesman said.

“We put 600 to 700 uniformed and plain clothes policemen in place to avoid any disorder and restrain any racist protest,” Micky Rosenfeld told AFP.

A fortnight ago, security was deployed for a match between Beitar and another Arab team, which ended without incident.

Sakhnin supporters arriving on buses for Sunday’s match were to be given police escort to Jerusalem, Rosenfeld said.

Interior Security Minister Yitzhak Aharonovitch told military radio that racism “must be dealt with at the root. We have a policy of zero tolerance against these kinds of criminals.”

His comments came after Beitar’s offices were torched on Friday, after it signed up two Chechnyan Muslim players.

The attack took place hours after prosecutors on Thursday filed charges against four Beitar supporters accused of racist chants aimed at the Muslim players during a match and at a training session.

Prime Minister Benjamin Netanyahu said in a statement that in light of the Jewish people’s historic suffering at the hands of racists, such behaviour by Israelis was “shameful.”

Beitar Jerusalem have a reputation of attracting a hard core of anti-Arab fans, with many of its supporters adamant the club should never sign an Arab player, even though Muslim footballers have played for Beitar in the past.