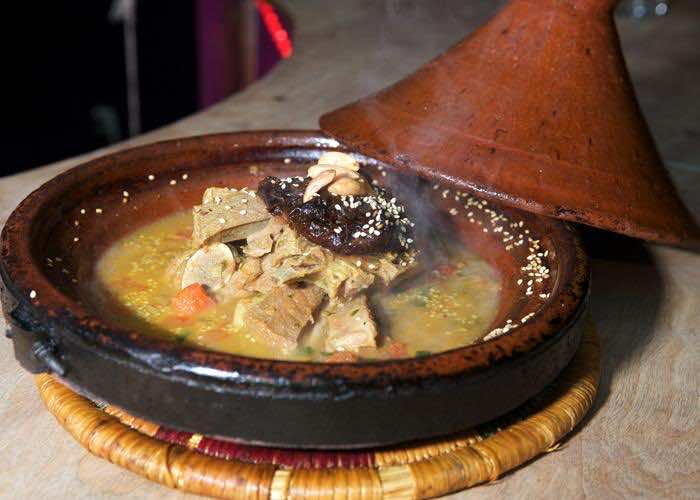 Tagine restaurant, which was established in 2000 by Hamid Idrissi, a Moroccan-American and his partner and wife Toni Gallo, an American of Italian origin, has moved to an amazing new location, on 221 West 38th Street by 7th Avenue, right in the heart of Fashion District NYC. Tagine is one of the few restaurants in New York that provides its customers with a delightful and original Moroccan food. What distinguishes it from other Moroccan restaurants is the home-made bread and different varieties of dishes it offers.

Tagine hosts almost daily live music, belly-dancing and a variety of events. To cater to the demands of its customers, it will now be open for lunch, in addition to dinner and late night. Over the past 12 years, chef Hamid and his wife Toni served an array of diverse communities, through several arteries in Tagine Dining Gallery.  First, their cuisine, the only style of its kind in Manhattan, was artisanal, handcrafted from pickling to baking their own bread, encasing their own meat, poultry and fish. The owners of the restaurant re-engineered tagines (traditional Berber clay pottery) for commercial purposes, while introducing other Moroccan specialties to the landscape of restaurants that illuminate the streets of New York’s skyline.

Tagine’s brand and objective is to transport their guests into the tranquility of slow food dining, vibrant, colorful palettes and melodic soothing soundscapes.

We invite New Yorkers and people who are visiting New York to come experience our Berberlicious Dining and Music, mingling vortex,” said Toni,  creator, proprietor and Event Specialist of the restaurant.

“We are honored to boast over 2000 Facebook friends, who anxiously awaited our renaissance,” she added.

Throughout the period when Tagine’s owners were in the process of refurbishing their new location, regular customers were longing to see it re-open, as many of them consider it as a landmark and their home.

“Tagine was truly a unique and magical place in Manhattan and I know that I and many of my friends were eager to see it re-open,” said Daniel Choi, managing director at UBS.

“What I like more about Tagine is that it has the warmest and most welcoming staff that make their guests feel like family,” she added.

What attracts most customers is not only the quality of the food served, but also the Moroccan atmosphere that it offers, especially on Fridays and Sundays. As the Moroccan culture is becoming increasingly trendy in New York, more New Yorkers are looking forward to having a foretaste of the Moroccan experience. Tagine provides them with the opportunity to experience first-hand with the fine Moroccan cuisine.

“One of the great things about Tagine is while it is an eclectic Moroccan restaurant, the customers represented all walks of life and circumstances,” he added.

During its tenure at 537 9th Avenue, Toni and Hamid often hosted fundraising events, beginning in 2001 for a Women’s based Afghani organization based in NY, to catering pro bono three large benefits for Haiti (Wings over Haiti), local public schools, baking for The Newcomers School in Astoria, Queens, platters for FIT and their annual banquet, and most recently SACHR (an HIV grass roots organization) held their fundraiser at Tagine.

They also promoted and supported the arts by offering steep discounts for ticke-tholders for local theaters, offered our venue for a fundraiser for The Academy- TV-Theater and off Broadway production, which also produced the show in Tagine’s downstairs lounge. During the treacherous moments during and post 9/11, they brought food to ground zero, gave food and beverage to local Fire Department and opened their doors for those who could not reach their loved ones.

Whether you are looking for Tangia, couscous, Harira, Zaalouk or a wide range of dishes, Tagine restaurant is the best place for you.