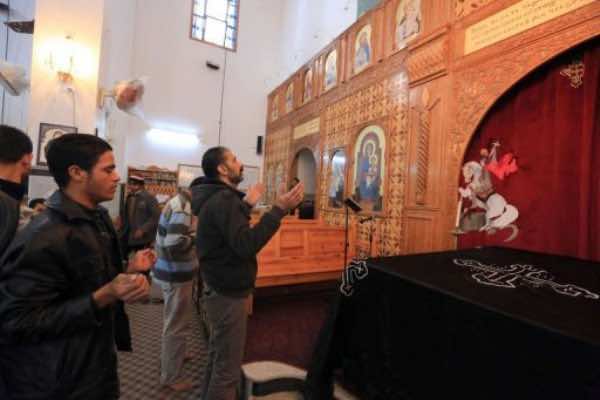 “Not a day goes by without tombs being vandalised,” says Dalmasso Bruno, caretaker of the Italian cemetery in the Libyan capital where Christians fear rising Muslim extremism.

“Human bones have been taken out of their tomb and scattered across the cemetery” in central Tripoli, he said. “The Libyan authorities came and took pictures. They promised to take measures but nothing has been done.”

Since the 2011 fall of Moamer Kadhafi’s regime, the small Christian community’s fears for its safety have increased, especially after a church bombing in December killed two people in the Mediterranean town of Dafniya.

But despite such fears, dozens of worshippers mostly from India, the Philippines and African nations attend mass each week at the Catholic church of Saint Francis near central Tripoli to pray for security to be restored in Libya.

“Look there are no security measures outside the church and the faithful can move around freely around,” said Father Dominique Rezeau.

But elsewhere in Libya, Christians are not so untroubled.

“In Cyrenaica, pressure has been exerted on Christians, notably the nuns who had to leave their congregation … in the east of the country,” said Father Rezeau.

He said Libya had as many as 100,000 Christians before the 2011 revolution that toppled Kadhafi. “Now only a few thousand remain.”

The main Catholic Church’s clergyman in Libya told the Vatican missionary news agency Fides earlier this month that Christians are being driven out of eastern Libya by Muslim fundamentalists.

The Apostolic Vicar of Tripoli, Giovanni Innocenzo Martinelli, said the situation in that region was “critical” and the “atmosphere very tense.”

Two religious communities in the east of the country — the Congregation of the Holy Family of Spoleto and the Franciscan Sisters of Child Jesus — were
forced to leave “after being pressured by fundamentalists.”

The Apostolic Vicar of Benghazi has been advised to take precautions ahead of a large-scale demonstration on February 20, Martinelli told Fides.

Libya’s second city Benghazi was the cradle of the uprising against Kadhafi’s dictatorial regime that erupted in February 2011, and the eastern hub has since been at the forefront of Islamist-linked unrest.

Several international agencies and diplomatic missions have come under attack, the deadliest being a September 11 assault on the US consulate in Benghazi that killed ambassador Chris Stevens and three other Americans.

But the Catholic church in Benghazi remains open, Martinelli said.

Before the uprising, three percent of Libya’s population of around 6.3 million were Christian. Most of those who remain are expatriates, including Egyptian Copts who form the largest community.

After mass at St Francis Church, the multinational congregation gathers to socialise while a group of Nigerians in traditional clothes set up a table to sell decorations made of wood.

Antony Amstrong, a Ghanaian who has been teaching French in Libya for the past two decades, deplored the rampant “violence and security” since the anti-Kadhafi uprising.

“All the sacrifice made by Libyans and the price they paid have not brought stability to this country,” Amstrong said.

Ftsing Giscard, an electrician from Cameroon who has been living in Libya for three years, agreed.

“Insecurity is a problem that affects everyone,” he said, stressing that Africans are most at risk because “Libyans accuse them of being mercenaries who fought alongside Kadhafi’s forces.”