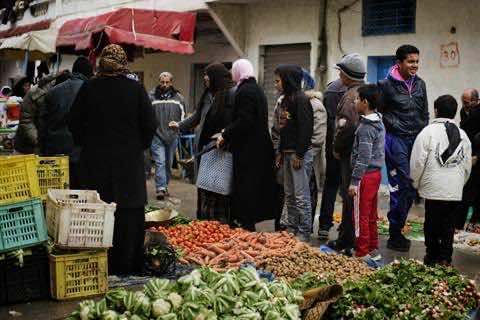 Farida’s shopping basket is sadly empty as she walks about the Kabaria market in Tunis, where disenchantment is growing over the government’s failure to make good on pledges to improve dire living conditions.

“All the politicians lured us during the elections with many promises but none of them were kept. Our life is miserable,” the 40-year-old housewife says in Kabaria, a poor suburb of the Tunisia capital.

The country where the first Arab Spring uprising led to the ouster in 2011 of a dictatorial regime has been reeling with unemployment at 17 percent and a high cost of living — the same engines that drove the revolution.

“Prices have never been so high. Even under the ousted regime rich and poor alike could fill their shopping baskets and eat well,” says Saeeda, another female shopper striving to find a good buy among the fruit and vegetable stalls.

The streets of Kabaria are muddy and pot-holed, a reflection of the grinding poverty which the Islamist-led government has been unable to eradicate since it was formed in December 2011.

“This government is responsible for the rise in the cost of living and they need to give us explanations,” says Saeeda, as a dozen women around her nod their heads in agreement.

Merchants, too, join in the lamentations about worsening living conditions.  “Things are very bad these days in the country and as you can see the market is empty. I can’t even sell a pumpkin,” says Hisham, clad in a thread-bare vest and shoes without socks despite the bitter cold and driving rain.

Hisham is blind and father of two who tries to make a living pushing a vegetable cart.

Supporters of the Islamist Ennahda party try to discourage people from speaking their mind.

“All is well. The prices are reasonable and the government will overcome the crises caused by France,” one supporters of the ruling party says about the former colonial power.

But Lasaad Majeri will not be swayed.  “They are all thieves. (Ennahda chief) Rached Ghannouchi is a big-time assassin. (Prime Minister) Hamadi Jebali is an assassin,” he shouts loud enough for everyone to hear.

Social tensions that have gripped Tunisia for months were exacerbated last week when leftist leader and outspoken government critic Chokri Belaid was gunned down outside his Tunis home, with his family blaming Ennahda for the murder.

Belaid’s funeral on Friday turned into a massive anti-Islamist rally.

The crisis also laid bare divisions within the party itself as the prime minister threatened to quit and warned of chaos unless key ministries held by fellow Islamists go to independents in a new government of non-partisan technocrats.

But in Kabaria people are more concerned about their everyday survival than politics.

“We don’t have jobs, we don’t have a dignified life,” says Lasaad, a young unemployed man who like many other disfranchised Tunisians dreams of travelling to Europe in search of a better life.

In September a boat carrying over 100 Tunisian migrants sank off the coast of the southern Italian island of Lampedusa. Rescue services managed to pull 56 people to safety but the others were lost at sea.