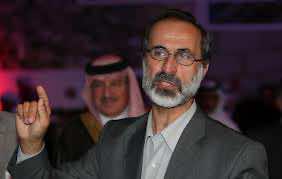 The head of Syria’s opposition coalition, Ahmed Moaz al-Khatib, said Monday he had received “no clear response” from the regime of President Bashar al-Assad over his offer of dialogue.

Khatib said in late January he was prepared to hold direct talks with regime representatives who did not have “blood on their hands,” and so long as the discussions addressed replacing Assad.

“The issue is now in the regime’s camp. It has given no clear response yet that it accepts that (Assad) will leave. There has been no official contact until now,” Khatib told reporters in Cairo after talks with Arab League chief Nabil al-Arabi.

“I am sending a last message to the regime, so that it tries to understand the suffering of the Syrian people, because the revolution will continue and will never stop,” he added.

“We call on the regime… to leave in order to avoid more bloodshed and destruction. We don’t want war, but we have nothing against continuing until we die so that Syria can be free of this regime,” he said.

The Assad regime had said it was open to talks but with no pre-conditions.

In a statement posted on his Facebook page on Sunday, Khatib proposed that the dialogue take place in “liberated areas,” in rebel-controled northern Syria.

Khatib’s initial offer was met with support from the United States and the Arab League and also from Syria’s allies Russia and Iran, with whom the opposition leader recently held talks.

But the call for dialogue also sparked tension within the opposition coalition, whose key member the Syrian National Council is vehemently opposed to talks with the regime until Assad steps down.