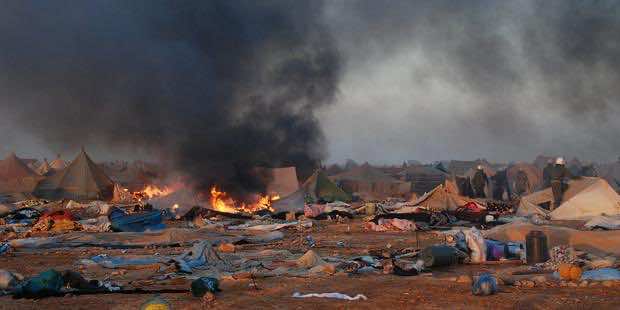 The military court in Rabat has decided to resume the hearing on Monday of the individuals allegedly linked to the events that accompanied the dismantling of the Gdim Izik camp on defense request.

At the hearing session held on Sunday, the defense submitted a plea to allow the defendants to have some rest, which the court accepted in accordance with Article 95 of the Code of military Justice.

At this meeting, which lasted more than eight hours with rest breaks, the military court resumed the hearing of the defendants, who dismissed all the charges against them.

The military court has heard ten individuals among the 24 defendants who are facing charges of “constituting criminal bands, violence acts against police leading to premeditated death and corpse mutilation.”

The trial which started on February 1, takes place in the presence of national and international observers, and several associations and human rights NGOs.

These events, which date back to October-November 2010, killed 11 law enforcement officers, including a fireman, injured 70 others, and caused important material damages to public buildings, and private goods and properties.