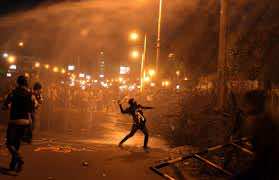 Dozens of masked men carrying wooden sticks andknives smashed the glass front of a luxury hotel in Cairo on Tuesday before fleeing, a security official said.

The scene caused panic in the Shepheard Hotel, close to Tahrir Square, and on the nearby Nile corniche where traffic was briefly disrupted.

Dozens of hotel staff then formed a human chain to protect the hotel from the attackers, who fled before police arrived, the official said.

Egypt has been gripped by security related problems since the revolution that toppled Hosni Mubarak two years ago.

The area around Tahrir Square has also witnessed weeks of sporadic clashes.

A nearby luxury hotel was ransacked and looted last month during confrontations between police and protesters.