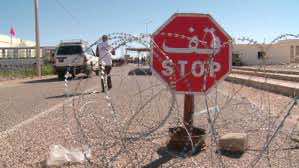 Libya will close its borders with Egypt and Tunisia for four days from Thursday as it marks the second anniversary of the start of the revolution that ousted dictator Moamer Kadhafi, officials said.

Prime Minister Ali Zeidan said international flights will also be suspended at all airports except for those of the capital Tripoli and second city Benghazi in the east, the official Lana news agency reported on Tuesday.

The “preventive” measures were decided after repeated calls for protests to be held nationwide, including some who have demanded a “second revolution” in protest at what they say is the new Libyan rulers’ failure to push for reforms.

“On Monday night, a cabinet meeting decided a series of security measures concerning the protection of borders, air traffic control… from 2:30 am (0130 GMT) Thursday and until February 18,” Zeidan said in the statement.

He said overseas flights will be suspended except for those taking off from the Tripoli and Benghazi airports.

“Border posts with Tunisia and Egypt will also be closed… during that same period,” he said “to prevent any bid to undermine Libya’s security and disrupt celebrations marking the anniversary of the revolution.”

Security services have been placed on alert and checkpoint have been set up across Tripoli ahead of the anniversary marking the “February 17 revolution.”

Libya has long and porous frontiers with several neighbours.

In December it closed its borders with Algeria, Niger, Chad and Sudan citing a deterioration of security in the south of the country and the vast arid desert was declared a military zone.

Islamist rebels active in Mali are believed to be made up in part of fighters recruited by Kadhafi who fled the country following his October 2011 death.

There has also been a massive flow of arms from Libya.