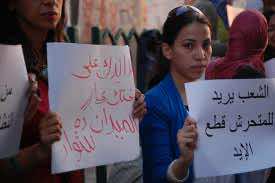 Egyptian protesters took to the street again on Tuesday to demand an end to sexual violence, as campaigns against the repeated attacks in central Cairo pick up steam.

“A woman’s voice is a revolution,” the protesters — both men and women– shouted, brandishing large flags of female Egyptian icons.

Tuesday’s protest is the latest in a series of action demanding an end to the culture of impunity, following harrowing reports of mob attacks in and around Tahrir Square.

The attacks are “a weapon in the ongoing political fight,” said Mayar Abdel Aziz, blaming “opponents of freedom” for being behind them.

Sexual harassment has long been a problem in Egypt, but recently the violent nature and frequency of the attacks have raised the alarm.

“We used to be passive and not ask for our rights,” before the revolution, Abdel Aziz told AFP.

The protesters are also furious over statements from members of the upper house of parliament which blamed the women for inviting attack.

“Women sometimes cause rape upon themselves by putting themselves in a position which makes them subject to rape,” said Salafi deputy Adel Afifi, quoted by local media.

“Horrific, violent attacks on women including rape in the vicinity of Tahrir Square demonstrate that it’s now crucial President Morsi takes drastic steps to end this culture of impunity and gender-based discrimination, and for all political leaders to speak out,” said Hassiba Hadj Sahraoui, Amnesty’s deputy director for the Middle East and North Africa.

At the Cairo protest, women spoke of the “systematic” nature of the attacks.

“We have always experienced harassment (in Egypt). But the new thing is that the violence has become systematic,” said Asmaa Ali who runs a group to combat the problem.

“Harassment is a polite word. We need to call it sexual attack. It has even reached gang rape in Tahrir Square,” she told AFP.