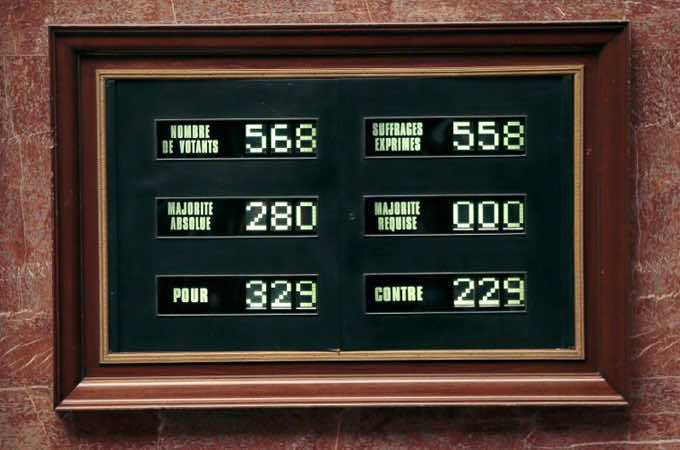 France’s National Assembly voted Tuesday to adopt legislation allowing homosexual couples to marry and adopt children, and the law will now go for approval by the upper house of parliament.

The legislation, a key election pledge of Socialist President Francois Hollande, was backed by 329 deputies and was opposed by 229 after months of frenzied debate.

The formal vote came 10 days after lawmakers voted overwhelmingly in favor of its key article which redefines marriage as a contract between two people rather than between a man and a woman.

The Senate, the upper house of parliament, will debate the law from April 2.

Gay marriage has proved to be a highly divisive issue in officially secular but overwhelmingly Catholic France, with hundreds of thousands taking part in protest marches.

The anti-gay lobby is set to stage a new march on March 24.

Opinion polls suggest a clear majority of French voters support the right of gay couples to wed and a narrower majority favor them being granted the right to adopt as couples.

Gay men and women can already adopt as individuals if approved by social services.

A separate law on providing medically assisted conception to gay couples, already extended to heterosexual couples unable to conceive, will be debated later in the