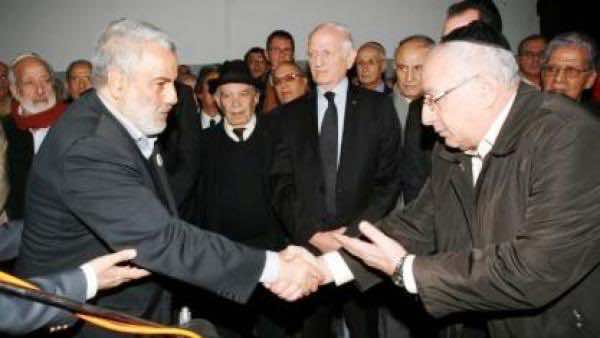 The project of the Slat Fassiyine synagogue in Fez has been completed. This historic monument in the Medina of Fez dating back to the 17th century has been fully restored. Its inauguration took place today, February 13 under the patronage of King Mohammed VI and was organized by The Judeo-Moroccan Heritage Foundation (FPCJM) and the Jewish community of Fez. It was also attended by the head of the government, Abdellilah Benkirane from the Party of Justice and Development.

The Slat Fassiyine synagogue, which was originally built in the mid-sixteenth century, is one of the oldest and most important synagogues in North Africa. It has been listed as a historical monument in Fez, and is also included in the list of 100 endangered monuments of the program of preservation funding initiated by World Monuments Watch (WMW). The structure, located in the hearth of the mellah (Jewish quarter) is a rare survivor of a pivotal time in Moroccan Jewish history.

The synagogue contains perhaps the only complete set of Moroccan synagogue fittings in existence, including the reader’s wooden and wrought iron canopy platform – the tevah, on the west side, the twin wooden-carved Arks for the Torah – the hechal, built-in on the east side ornamented tiled wall. It also features wooden benches and chairs, including Elija’s Chair (for the circumcision ceremony), oil lamps and embroidered hangings.

For many years, the building was increasingly falling into decline and required immediate refurbishing. The Jewish communities of Fez and Casablanca struggled to preserve the building as an essential part of the Jewish and Moroccan heritage and as an important cultural and historical legacy.

The renovation was carried out with the kind assistance of private and public entities, including the Moroccan government.

Its inauguration, under the high patronage of King Mohammed VI was celebrated today in the presence of Moroccan Prime Minister and the President of the German Bundestag. The restoration and inauguration represent another powerful symbol of religious tolerance and coexistence in Morocco.