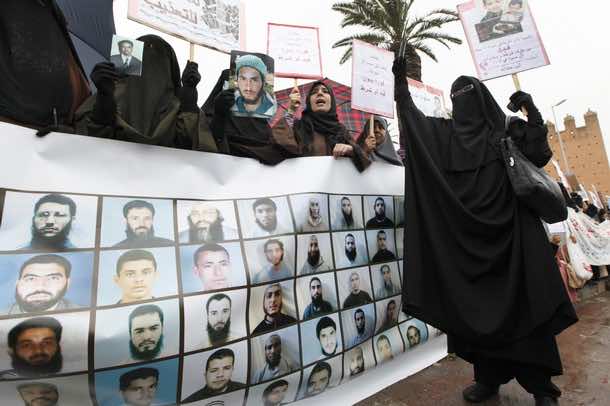 A number of Salfi Jihadist leaders, detained in the prison, submitted a political chart entitled “The Political Chart of National Committee for Reconciliation and Review.”

The chart adopts a civic state as a political option along with individual freedoms that have been long regarded as a stumbling block before any tangible progress in the dialogue with the Islamists.

The daily Almassae reported to have received the chart which is made up of 16 articles. It stated that the royal regime is the symbol of unity, calling for consolidating the identity of the nation which is embodied in the Islamic religion and a national unity of different aspects under the umbrella of parliamentary monarchy and civic State.

A source from the National Committee for Reconciliation and Review in the prisons said that the aforementioned political chart had been received by the ministry of Interior and various security services which is taking charge of supervising the case of Salafi Jihadists.

The source added that the purpose was to send an encrypted message to the authorities and to the public opinion that those Islamists have got a clear political vision.

The chart accepted the political action on the basis that it brings forth the opportunity for the people to express themselves, to reform the institutions and to ward off corruption.

Furthermore, it regarded Islam as the state’s religion, but stressed on its duty to guarantee the right to plurality in faith, intellectual freedom and justice, emphasizing the sovereignty of judicial system and separation of power.

The chart urged for building a diverse modern civic State that guarantees social justice. It also  highlighted  the protection of human rights, from individual and group freedoms to racial and linguistic diversity to equality at the economical, political, social and cultural levels, but taking into consideration the country ‘s identity and its Islamic background.

Additionally, it called for banning any form of discrimination on the ground of sex, color, belief or culture as well as that of social, regional or linguistic affiliation. It also demanded legal, social and economical protection of families.

Conversely, the daily has also reported that the political initiative which is taken by Hassan Khattab, leader of Annsar Almahdi cell, and Abd-Erazzak Samah, emir of Moroccan Jihadist movement, was rejected by some Salafist detainees among which are Omar Maarouf, Noureddine Nafiaa and an unknown group called “Free People in the Moroccan Prisons.”

Noureddine Nafiaa sent a letter from prison in which he denounced the involvement in political action, describing politics as a “dirty game.”