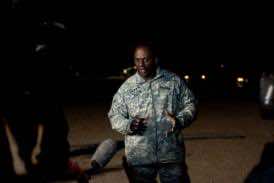 Sectarian tensions and political discord in Iraq signal a “troubling” trend in the country since US troops withdrew a year ago, a top American general warned on Thursday.

Iraq has remained stable but “fragile,” said General Lloyd Austin, who was the last US commander in Iraq before all his forces withdrew in December 2011.

Austin offered his assessment when pressed by Republican Senator John McCain, a hawk on the Iraq war who has heavily criticized President Barack Obama for pulling out American troops.

“So do you believe Iraq is headed in a positive or negative direction?” McCain asked the general.

“Sir, I think, again, some of the things that we’re seeing in Iraq are very troubling, with the Arab current tensions, with the Sunni protests,” he said.

McCain then asked: “So whether we had troops there — a residual force there or not wouldn’t have mattered?”

Austin acknowledged that a US troop presence would have been helpful.

The Obama administration says it sought to negotiate a follow-on force but the Iraqi government refused to grant legal immunity to US forces deployed there.

McCain and some other lawmakers, however, have argued that the White House did not make a concerted effort to clinch an agreement.

Austin said that while there was cause for concern, there were also some encouraging signs, citing oil production and the performance of Iraqi security forces, which he said had remained united despite political crisis.

“They’ve been challenged several times, in terms of security, but the security forces have really held, and they’re still loyal to the civilian leadership. They haven’t fractured,” the general said.

“And so there are a couple of things in there that do indicate that if they begin to make the right decisions politically, that I think they have a chance at moving in the right direction.”

Austin discussed Iraq and other hotspots at a Senate Armed Services Committee hearing on his nomination to take over US Central Command, which oversees US forces across the Middle East and Afghanistan.

Iraq has been rocked by a wave of car bombs and suicide attacks in recent weeks, raising fears of a return to the sectarian bloodshed that plagued the country from 2005 to 2008.

The violence has come against a backdrop of political crisis and weeks of protests in Sunni-majority areas demanding the ouster of Shiite prime minister Nuri al-Maliki.