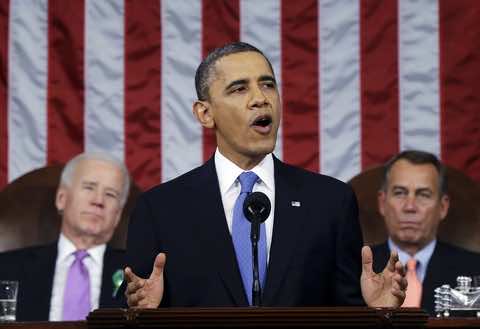 Americans expected President Obama’s message during the State of the Union to have a more conciliatory tone than that he used at the inauguration of his second term. Actually, the U.S. President reeled before the two chambers an exciting agenda of priorities intended primarily to boost the economy, and sought these policies’ support in an overtly partisan way, separate from any politicized argument. The biggest challenge will be to get the minimum of agreement from the paralyzed Congress.

The gist of the speech was again the White House’s refusal to cut social programs if a significant increase in taxes on the wealthy does not occur. Obama, in his role as champion of the middle class, summoned his opponents to accept new tax increases in exchange for spending cuts to try to balance the soaring U.S. debt and fiscal holes on the horizon. “The most powerful nation on Earth,” he said, “can not manage its economy from crisis to crisis.” The rejection of this recipe from the Republican speaker, Senator Marco Rubio, coated surprisingly a moderate tone, far from the clumsy fanfare that characterized the defeated presidential candidate Mitt Romney.

Obama seems determined to win over public opinion as the only way to force the hand of Congress. But the American political reality is complex, and for certain reasons the presidential or expository force of citizens’ preferences do not automatically win the favor of the legislature. Nothing assures the president that his priorities are to pass the filter of the House of Representatives that is in the Republican hands. It is likely that many of his proposals will continue to be opposed, with the exception of immigration reform, largely because the conservative party has come to realize that changing positions here is necessary to reach the White House.

Apparently the presidential program has a crucial but ambiguous long letter to Santa Claus. It remains unclear whether  it will  prioritize the control of firearms in the hands of citizens, action against climate change or the varied educational proposals contained in this speech on the State the Union.