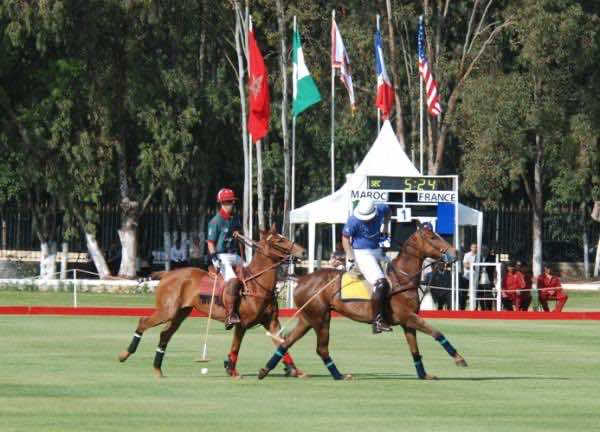 The 2500 year-old game of polo is one of the fastest, roughest, and most dangerous sports played today. It is gaining increasing popularity as a premier spectator sport and can be an easy game for the first-time spectator to enjoy. Imagine the excitement of seeing players on thoroughbred horses bumping and jostling with each other as hockey on horseback, racing at top speeds down the field while striking a small ball with the precision of an experienced golfer.

An Asiatic game, and possibly the oldest team sport, polo was probably first played on a barren campground by nomadic warriors over two thousand years ago.

Valuable for training Calvary, the game was played from Constantinople to Japan by the Middle Ages. Known in the East as the Game of Kings, Tamer Lane’s polo grounds can still be seen in Samarkand.

British tea planters in India witnessed the game in the early 1800’s but it was not until the 1850’s that the British Calvary drew up the earliest rules and by the 1869’s the game was well established in England.

James Gordon Bennett, a noted American publisher; balloonist, and adventurer, was captivated by the sport and brought it to New York in 1876 where it caught on immediately. Within ten years, there were major clubs all over the east, including Newport and Long Island.

Over the next 50 years, polo achieved extraordinary popularity in the United States. By the 1930’s polo was in the midst of a Golden Age – it was an Olympic sport and crowds in excess of 30,000 regularly attended international matches at Meadow Brook Polo Club in Long Island. The galloping game produced athletes who would doubtless have achieved greatness in any sport: Cecil Smith, the Texas cowboy, who held a perfect 10-goal rating for a still-record 25 years; Devereux Melbourne, instrumental in formulating modern styles of play; and Tommy Hitchcock, war hero, and the best of the best in international competition for two decades.

In the past 20 years, polo in the United States has undergone an unprecedented and remarkable expansion. At present, there are more than 275 USPA member clubs with over 3,500 players.

Polo is an international sport. During the summer season at Hurlingham, England, the fall season at Palermo in Buenos Aires, and the winter season at Palm Beach or Palm Desert 30 to 40 teams will be manned by players from the United States, Argentina, Zimbabwe, Canada, New Zealand, Pakistan, Mexico, France, Australia, South Africa, Great Britain, and a dozen other polo playing countries. For over 30 years,

The Argentines have been preeminent in the sport but explosive growth in players and the availability of good horses is honing the competitive abilities of challengers from many countries, including the United States.

In Morocco , the Royal Guard established the first King Mohammed VI International Polo Tournament in 2006: This edition is listed among the major international tournaments, and presents four teams in competition against each other: Spain, Egypt, France, and Morocco, the host country.

The event is intended to pay tribute to this ancient sport and provide it the impetus to occupy its rightful place on the sports scene. Morocco`s polo community in general has sought to revive this equestrian tradition that had long been practiced in the kingdom.

Polo practice was born in Morocco in the early twentieth century, over time, the kingdom developed several polo teams that have participated successfully in many tournaments and events. In March 2010 the Royal Guard Moroccan team was awarded the title of the International Cup of Moroccan Embassy in Argentina, played recently in Buenos Aires. Morocco won after beating its counterparts United States in the semifinals (7-5) and Argentina in the final (8-6).

Morocco’s King Mohammed VI has given a great boost to this sport by encouraging and promoting equestrian sports. In the process, the king upgraded polo clubs and ensured a high level of competition, even internationally. In November 2006 Morocco became the first Arab and African member of the International Federation of Polo.

Polo can enhance Morocco’s attraction as a tourist destination for the international polo community, and put the country on the world tournament map, Finally The Polo can  contribute billions of dirhams to the economy employment opportunities.

Rabii Benadada is a researcher in sports management at the ISCAE Business School in Casablanca, Morocco.