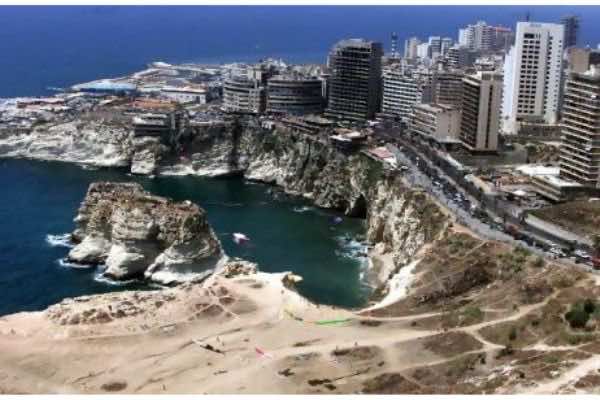 The sun spills through the kitchen door in this late morning hour. It is meaningful and relentless as it washes the stone floors with its warmth under my bare feet. I set water to boil for Arabic coffee and I am drawn to the back door, which is wide open to a bustling city. Doors and windows in Beirut are perpetually open in the summertime. As I step to the balcony, the sun paints my face with its fierce heat. I breathe in Lebanon’s freedom and reinvention of self after a twenty-year war.

Today is new; tomorrow is in the making.

I finger the clothes line, rusty in spots, strung from one end of the balcony to the other. Sundries flap happily in the cross breezes without regard for the asphalt five stories down. Risk: part of the human landscape in Beirut; anything can happen; a bombing, an assassination, an invasion, a war, a wedding. Despite this, life forges ahead with little effort to dredge up the past and sulk in its lament. Those sort of tears are left to salt the Mediterranean by the women who have lost husbands and sons to war.

If I close my eyes, the scent of the sea lingers in coastal breezes. Being in a continual languid state must be a practiced art for Arab women because something still struggles within me to be somewhere at some certain time. There’s a feeling of guilt that ever so slightly suggests I ought to be at the office or sitting behind a desk or punching the clock. In the East, there exists an internal clock, one connected to the movements of the sun and moon across the sky. Perhaps this is the reason I’ve always disliked wearing a watch. My natural inclination to follow the sun and to recognize place and time in this manner must have been deeply rooted in me by my ancestors. I fall into Beirut as a baby into its mother’s arms.

The coolness of the kitchen’s shadows welcomes me back to the boiling water. I believe my coming to the East was preordained, as if my ancestral people had been calling me to this traditional kitchen, with its marble countertops and wood paneling. Barefoot girl; this is what I always was all my life. The floors refuse to let go of my feet and I open the cool refrigerator.

I retrieve a pound of fresh ground Cardamom laced Maatouk coffee from the freezer and break open its package; the coffee’s bouquet bursts out and fills the entire kitchen with its aroma. This is how grounds ought to be, pungent and seductive before coffee making.

It was yesterday, I recall… the kindly old Arab man who had sold this exquisite coffee to me from the shop downstairs around the corner. My eyes had been on the numerous open boxes of sweets behind him and I did nothing to conceal my desire to taste one. Somehow, he knew this without asking and before I left, he placed a sweet in my hand to take with me. This is the nature of the Lebanese, to somehow read your heart, read your secret desires and without words, know exactly how to respond to your needs. While crossing the narrow street with Khodor in tow, I bit into the sugared nut and chew, savoring the taste, but before I could take another bite, my friend had swiped the delectable morsel out of my fingers and taken it for himself. How dare you, I cried out to a set of deaf ears and he marched on ahead without a word.

I followed him through the narrow street, teasingly trying to snatch it back, both of us laughing as we made our way to the apartment. That moment brought fond memories of my sisters and my mother and how we would take form each other’s fingers and eat from each other’s plates. My mother would stand in the middle of the kitchen like an island and I’d run past as a young girl, stopping to take from her fingertips raw kibbe, a slice of mango or a taste of whatever she was making. My water is at a boil and I place three heaping tablespoons of coffee grounds that quickly dissolve liquid black. I turn off the fire, add a tablespoon of sugar and then let it sit until coffee grains fall to the bottom giving proper definition to “mud” coffee. I place a small saucer over the opening of the rakwe in order to trap the heat, and then carefully arrange two demitasse on a tray, along with the kakwe and carry it out to the living room. The morning is quiet and the brilliant sun splashes through the open glass off the front balcony.

I think of the women I’ve found in Beirut so far; the toothless granny expressing every dirty word in the book as she waddled down a narrow street to greet my host Khodor, not a tooth in her skull as she laughed hysterically at seeing him home from the States. Later, he told me that this granny, this wonderful old woman had armed herself with an AK47 on each shoulder during the civil war. I was shocked. Then there was the middle – aged woman in the last stages of conventional beauty who would sit at her stucco balcony wall a few streets over from the apartment. Khodor and I would come and go and still, I would see her in that exact position, her chin cradled in her hand, arm leaning onto the wall and a far off gaze in her green eyes.

And then there was the much younger woman who completely mystified me. It had happened one evening that my eyes fell from the dark sky to the balcony one flight down and across the way. As I listened to the city hum, I watched her pace the balcony back and forth, back and forth. On this particular evening, there was an unusual stillness in the air, as if everyone had gone off to the downtown plaza, everyone that is except for this young woman. She paced side to side in the shadows, sometimes disappearing into her well-lit living room only to return and start over again. What was most curious about all this was what she held in her hands. Was it a script? Love letters? And why was she reading and pacing, almost to the point of obsession as the hours walked by. Was she a student? I asked Khodor, but he only shrugged. Had she been spurned by a lover and lost her mind? Her incessant pacing, which appeared quite natural except for the fact that it went on for hours, disturbed me. In the silence that followed my curiosity, under the starless skies above, I resigned myself to the unknown.

Sometimes in life, in Beirut, there are no answers.

On another evening, the night not yet ahead of me, I went to the back balcony railing. There, across the way, I watched a group of women three flights down playing a serious card game under one stark light bulb. I hummed to myself as I watched. They were passing the hour, smoking argila and cackling among themselves like hens. Beside them, sheepskin hung from a clothes line. They smoked; they laughed and passed the time with such ease, I envied them. I tried to imagine the women in Los Angeles doing this, setting aside their crazy work schedules, their shopping and dinner dates, to enjoy each other in a simple card game. The idea would be utterly foreign. Between my life back home and this life here, there was a great chasm and I knew it very well. I sadly retired back into my host’s apartment and longed for the women of the house to return from the south. I yearned for their hands to stir up the spices, knead the dough, roll grape leaves, and chop parsley. Only then would I, in this kitchen, find true meaning in the world.

Cecile Sarruf is Lebanese American and holds a BA in English Creative Writing from CSULB, Los Angeles, California and an MFA in Creative Writing from AULA, Los Angeles, California. Sarruf’s publications can be found in the following literary journals: rawi, poetic diversity “Windows of Tripoli,”  whlreview,  issue #5/1 “Kitchen in Beirut,” levantine center, “The Bone Keepers,” bella online, Mused – Fall Equinox 2009- Volume 3 – issue 3, “Wedding in Sur.” These excerpts are based on her upcoming memoir of her experiences as an English teacher to a small Islamic school in Los Angeles and her trip abroad to Lebanon during this time. Ms. Sarruf is also a professional fine artist and a member of House of Lebanon Artist Group, Los Angeles as well as a classically trained musician.