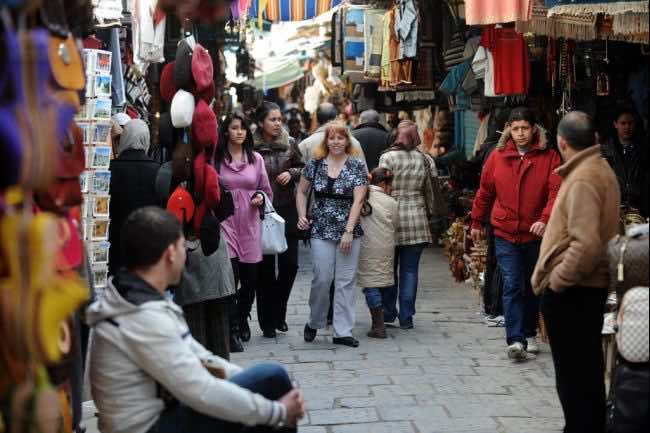 As Tunisia slips deeper into crisis two years after the revolution, workers in the once-thriving tourism sector say they miss the stability they knew under the dictatorship of Zine El Abidine Ben Ali.

“Before, we lived better. Nothing happened under Ben Ali. We were at peace. Security was better,” said Mahmud Ben Rabeh who runs a crafts stall in the blue and white hilltop village of Sidi Bou Said overlooking the Mediterranean.

“It is good that he left but before it was much better,” he said of the veteran leader who was ousted two years ago in a popular uprising that set off the Arab Spring in other regional countries fed up with autocratic rule.

The hilltop village is a prime Tunisian destination, named after a Sufi figure whose mausoleum was destroyed in a fire in January, but now the streets are empty and merchants like Ben Rabah say they can barely survive.

“I’ve been selling crafts for 25 years but I never was short of cash like now. I sold all my wife’s jewellery, even our wedding rings. I’ve got nothing left,” he said.

The authorities have been unable to determine whether the blaze was an accident or a deliberate attack by hardline Salafists, who have been blamed for looting and torching other shrines dedicated to Muslim saints in recent months.

A group of Salafists — whose radical version of Sunni Islam does not tolerate shrines or the veneration of saints — was arrested in early December after a similar blaze at the Sufi shrine of Saida Manoubia in Tunis.

Salafists in Tunisia, thought to number between 3,000 and 10,000, have grown in influence since the revolution that brought to power the moderate Islamist party Ennahda.

The Muslim extremists are accused of a wave of violence, and suspected of masterminding an attack last September on the US embassy in Tunis.

A once proud secular nation under Ben Ali, Tunisia has also been rocked by political and social unrest, with many accusing the ruling Ennahda party of “hijacking” the revolution.

The February 6 killing of leftist politician and vocal government critic Chokri Belaid triggered street clashes between the police and angry opposition protesters, and has enflamed tensions between liberals and Islamists.

A hotel manager is Sidi Bou Said said the revolution had blighted tourism, but he refused to be named “because I am afraid I will be gunned down” like Belaid.

“Tourism has been devastated since the revolution. Reservations are unpredictable, we cannot plan ahead. It is worse than during Ben Ali’s days, when Tunisia was stable and it was good for business,” he said.

A vital sector of the economy and key source of foreign currency, tourism represents 6.5 percent of gross domestic product in Tunisia.

But it has taken a beating since the revolution, leaving the hotel manager and others working in the sector fearful.

“We can barely pay our electricity bills and the salaries of the staff and there is nothing to reassure us on the horizon. Nothing expect violence,” he said.

Moncef, a waiter at the famous open air Cafe de Delices that overlooks the bay, agrees with those who say “we lived better under Ben Ali and earned a good living.”

But as soon as he expresses his views, the manager, sporting a long Salafist-style beard and wearing an Afghan tunic typically worn by jihadists, reprimands him.

“Who authorised you to give your opinion?” demands the man, before ordering journalists to evacuate the premises.

Ben Ali ruled with an iron-fist, repressing radical Islam and even oppressing devout Muslims who simply wanted to pray in mosques. Under his reign hardline Islamists were never seen in tourist districts.

In post-revolution Tunisia the opposition and civil society groups blame the Ennahda Islamist party for showing complacency towards the Salafists.

Tunisia analyst Slah Jourchi warned against disenchantment, however, saying it could be exploited by ex-regime diehards.

Jourchi, who sits on a so-called “council of wise men” set up by Prime Minister Hamadi Jebali to try to resolve the crisis, said all politicians were responsible and should work together to find a solution.