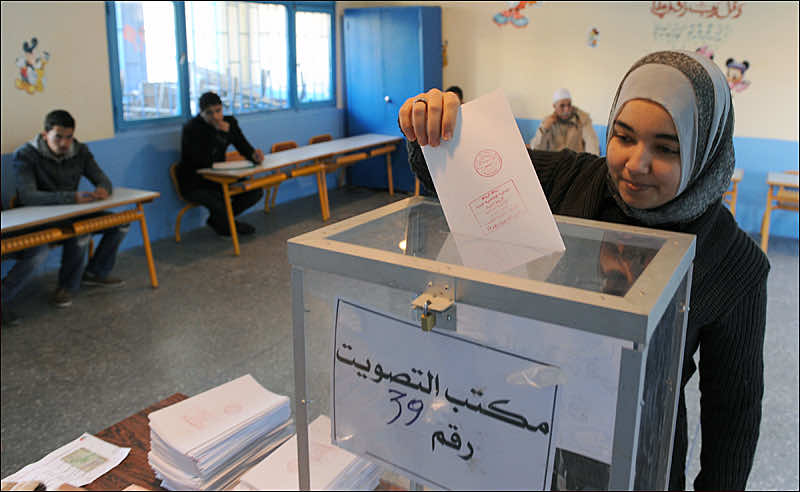 Young Moroccans say they want a louder voice in politics and the shaping of the kingdom’s new democracy.

They seemingly have little faith in politicians in power.

While young voters played an active role in the 2011 Morocco elections and the referendum on the Morocco constitution, only 1% of young people in the kingdom officially belonged to a political party, the High Commission of Planning reported last year.

Many now agreed that politicians could do a better job of representing young men and women in government, as well as delivering on their bread-and-butter needs, such as jobs and education.

“Parties must implement democracy internally, above all. That way, the most deserving will make it to the top, whether they are young or less young. Although some parties have recently undergone changes, on the whole they have not been favourable to young people,” 22-year-old law student Hamid Bekkali told Magharebia.

“Many of my peers have shown interest in politics and want to enter the fray, but the conditions aren’t right,” he said.

Some Moroccans are also growing weary of politicians’ inefficiency.

“There are big issues to be resolved, and officials are wasting time discussing side-issues,” 23-year-old Samira El Chaouni told Magharebia.

“Sometimes, you get the impression that politics is practised not for the benefit of society, but for something else,” she added.

One politician who appears to be heeding what young people are saying is Mohamed Grine, a member of the Party of Progress and Socialism (PPS).

“Contrary to what people say, young people are not shunning politics; rather, politics is shunning young people. Young people have become increasingly interested in politics since 2011,” Grine said.

He added that parties used outdated methods and must break the mould of being dominated by men and older people.

“They are structured in such a way as to exclude young people and women. Parties need to develop in order to incorporate young people,” Grine said.

The Young People’s Advisory Council, a provision which was written into the constitution, should come into being without further delay, political analyst Jamal Rihani said.

That way, young Moroccans can become more involved in politics and have a greater say in issues of importance to them, he added.

Parties are increasingly opening their doors to young people by allocating quotas for them within decision-making bodies, Rihani noted. However, much work remains in persuading young people that political activity can help spur social change.

Politicians cannot wait much longer to solve the country’s deep-seated problems, which directly affect young people. Prolonging this failure only will turn off youngsters from politics and drive away their potential votes, former People’s Movement MP Fatima Moustaghfir said.

“It is social issues that spur young people to love or hate politics. Young people want high-quality education and jobs. At the moment, the problem of unemployment is haunting young Moroccans,” she said.

The importance of solving these issues at the root of young people’s social discontent is closely tied to an urgent need to complete the democratic process by implementing the constitution’s text, Mohamed Grine said.

“With the Arab spring, there was a reform acceleration which resulted in a new constitution,” he said. “The building of democracy can actually only happen concurrently to economic and social aspirations, especially when it comes to young people and employment.”