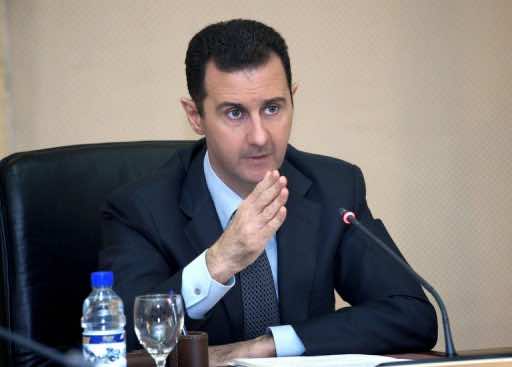 The opposition National Coalition said on Friday it refuses to accept President Bashar al-Assad in any talks on ending Syria’s war, as part of a “framework” it has drawn up for solutions to the conflict.

The Coalition issued the framework after a meeting in Cairo to discuss a proposal by its chief, Ahmed Moaz al-Khatib, to hold peace talks with regime representatives, a move that ruffled feathers in the umbrella opposition group.

“Bashar Assad and security leadership who are responsible for the current destruction of the country are outside the political process and must be held accountable for their crimes,” it said in a statement issued in English.

The eight-point framework was drawn up at a meeting of the National Coalition’s interim advisory political committee in the Egyptian capital on Thursday.

It singled out the Assad regime’s most powerful backers, Russia and Iran, calling on the former to ensure there are “adequate safeguards” to make the peace process possible, together with the United States.

The statement urged Iran’s leaders to recognise that the Islamic republic’s support for Assad “is pushing the region towards sectarian conflict” and realise that “Assad and his regime have no chance to stay in power.”

It said the “friends of the Syrian people” should understand that a solution would only take place though “changing the balance of power,” meaning support for the Coalition and the rebellion by “all possible means.”

Last month, Khatib said on his Facebook page that he was ready for dialogue with Assad’s representatives, subject to conditions including that some 160,000 detainees are released.

The regime in Damascus responded by saying it was prepared for dialogue, but without any pre-conditions.

Khatib’s initial offer was met with support from the United States and the Arab League and also from Syria’s allies Russia and Iran, with whom the opposition leader recently held talks.

But the dialogue call also sparked tension within the opposition coalition, whose key member the Syrian National Council is vehemently opposed to talks with the regime until Assad steps down.

The United Nations estimates that nearly 70,000 people have been killed since then.