Taroudant - Beef or lamb with prunes tagine is a classic dish in Moroccan cuisine that combines mysteriously the taste of sweet honeyed prunes and meat. 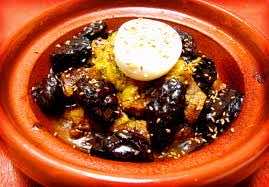 Taroudant – Beef or lamb with prunes tagine is a classic dish in Moroccan cuisine that combines mysteriously the taste of sweet honeyed prunes and meat.

Cooked or served in a tagine, a special earthenware pot used for braising meat with vegetables slowly at low temperatures, the meal results in tender meat with aromatic onions and thick irresistible sauce.

Prunes Tagine is traditionally served in weddings and other special occasions. However, many Moroccan families do prepare it often to break the routine of Tagine with vegetables, which is somehow a daily lunch meal. Beef meat with prunes is served with Moroccan bread for scooping up the meat and sauce.

Now that the dried fruits are abundantly available, you may want to replace prunes with apricot, fig or dates, but the process remains the same and the taste may slightly differ.  You may want to put an egg on the top or sprinkle some sesame over prunes and meat for a pleasant look and extra flavor.

Some toasted sesame and an egg (optional)

How to prepare prunes tagine in Moroccan Cuisine?