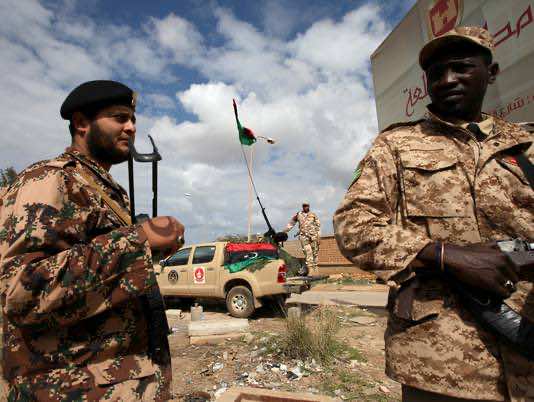 Libyan authorities in the eastern city of Benghazi have arrested four people suspected of carrying out Christian, missionary activities, a security official said on Sunday.

“An Egyptian, a South African, a South Korean and a Swede who holds a US passport, were arrested on Tuesday at a printing house, where they were printing books calling for conversion to Christianity,” Hussein bin Hameida told AFP.

“Libya is a Muslim country and preaching another religion is a crime under Libyan law,” he said.

Bin Hameida said an investigation was still under way and teh suspects “will be handed over to the intelligence services soon.”

Since the 2011 fall of Moamer Kadhafi’s regime, the small Christian community fears for its safety, especially after a church bombing in December killed two people in the Mediterranean town of Dafniya.

The main Catholic Church’s clergyman in Libya have said that Christians are being driven out of eastern Libya by Muslim fundamentalists.

The Apostolic Vicar of Tripoli, Giovanni Innocenzo Martinelli, has said the situation was “critical” and the “atmosphere very tense.”

Two religious communities in the east of the country — the Congregation of the Holy Family of Spoleto and the Franciscan Sisters of Child Jesus — were forced to leave “after being pressured by fundamentalists.”