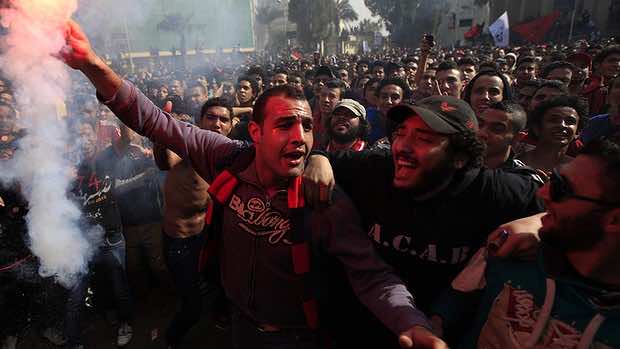 Thousands of Egyptians on Sunday closed down government offices and factories in the Suez Canal city of Port Said, demanding justice for dozens of people killed in clashes with police, witnesses said.

Demonstrators also shut down schools and banks and blocked a main railway route, but their protests did not impact traffic through the strategic Suez Canal, a canal official said.

The marchers were demanding justice for at least 40 protesters killed in clashes with police in late January after a court sentenced 21 soccer fans from the city to death over a deadly football riot last year.

In February 2012, 74 people, mostly supporters of the Cairo Al-Ahly club, were killed in a football riot in Port Said.
Home fans were held to blame, with Al-Ahly supporters pledging civil disobedience in Cairo if the court acquitted the Port Said residents.

Last month’s violence in Port Said and two other Suez Canal cities prompted President Mohamed Morsi to call in the military and declare emergency law there.

January’s clashes coincided with the second anniversary of a popular uprising that overthrew president Hosni Mubarak, bringing in a period of military rule and then the Islamist Morsi’s election last June.

Morsi has since had to contend with mass rallies led by a secular opposition and almost weekly violent protests by opponents of his Muslim Brotherhood movement.