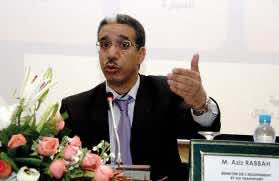 In an interview, Aziz Rbah, Minister of Equipment and Transport, pointed out that the 4,000 lives claimed by traffic accidents every year leave around 14,000 Moroccan families stranded. “We must fight fraud so as to avoid the looming threat under which we live,” Rbah explained.

During a meeting that coincided with the national day of road safety, Aziz Rbah made it clear that the studies conducted about the issue by his ministry have shown that 80% of traffic accidents in Morocco are due to human factor. Meanwhile, the minister tolled alarm bells to take the strictest measures against any fraud.

In the same vein, the minister went on to mention that gendarmes, security, drivers, and those responsible for the mechanical conditions of vehicles must take the issue of safety seriously, particularly that many of them have been caught red-handed while indulging in bribery.

“We must all assume responsibility for the yearly 4,000 claimed lives,” Rbah emphasized during the meeting. In this respect, the minister drew Moroccans’ attention to the 2012-2016 plan funded with two million MAD to alleviate the national problem.

Sous Massa Draa region has been reported to rank first in the number of road related deaths, followed by Fez Boulman, Casablanca, and then Taza-Al Hoceima-Taounate regions. Compared to 2011, 2012 witnessed a slight reduction of one thousand casualties.

Awareness-raising campaigns have been launched all over the country, especially at mosques, schools, and streets. Media, for its part, is now playing a key role to orient drivers and warn them against road dangers.

Citizens, as highlighted by several campaigns, must be on their guard against the everyday threats Moroccan roads pose.

In the end, the minister announced that a number of agreements and partnerships have been made and signed between the Ministry of Transport and the Ministry of Health in an attempt to improve medical services during such misfortunes.