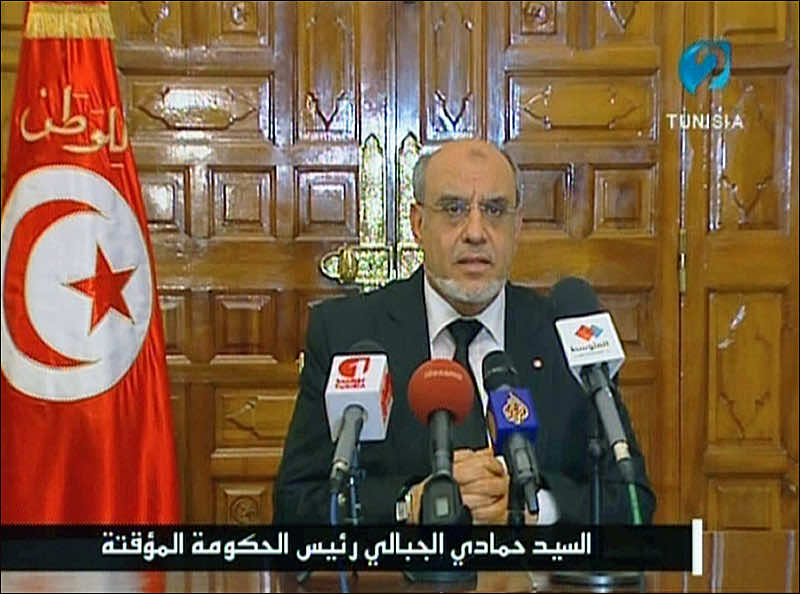 Tunisian Prime Minister Hamadi Jebali is set Monday to resume talks with political party leaders to form a new government of technocrats, despite strong opposition within his own ruling Islamist party Ennahda.

On the eve of the talks with Tunisian media urged political groups to reach a consensus for tackling the crisis that has gripped the country since the February 6 assassination of leftist opposition leader and vocal anti-Islamist Chokri Belaid.

However Ennahda party chief Rached Ghannouchi has strongly reiterated his party’s refusal to relinquish power in line with an initiative proposed by Prime Minister Hamadi Jebali, the party’s number two, to form a government of technocrats.

“Ennahda… will never give up power, as long as it benefits from the confidence of the people and the legitimacy of the ballot,” Ghannouchi told thousands of supporters who rallied Saturday in Tunis against Jebali’s plan.

Belaid’s murder came after months of failure by the ruling coalition to overhaul the government, and sparked bloody clashes between opposition supporters and police, as well as attacks on Ennahda offices.

Jebali has threatened to resign if he fails to secure the support he needs to form his new government.

Tunisian media on Sunday expressed deep concern over the ongoing uncertainty. “There are huge fears that this initiative, which has the backing of most of the opposition and the public, will be buried tomorrow, plunging Tunisia into a new cycle of conflict and political wrangling,” said Le Temps daily.

“We do not see how Jebali can reverse the tide and alter the position of his party and its allies,” the newspaper said. La Presse said that “good intentions must be followed by concrete actions and a shared desire to make concessions,” referring to Jebali’s cautious optimism about the rescheduled talks.

The Arabic-language Essabah said political consensus was a “national necessity.” “The nature of the crisis and its possible impact necessitates a break with partisan policies in order to seek a consensus,” it said.

Since an uprising toppled the regime of former strongman Zine El Abidine Ben Ali two years ago, Tunisia has been rocked by violent attacks, blamed on Salafist Muslim extremists, and social unrest over dire living conditions.

Ennahda, which was repressed under Ben Ali, won the October 2011 polls and controls the key foreign, interior and justice ministries in the coalition cabinet, as well as 89 seats in the 271-strong National Constituent Assembly.

But it is divided between moderates, among whom Jebali is the most prominent, and hardliners, represented by Ghannouchi, who are refusing to give up the key portfolios, insisting on the party’s electoral legitimacy.The family of Belaid has accused Ennahda of orchestrating his killing, which inflamed simmering tensions between liberals and Islamists in the once proudly secular Muslim nation.