Leftist President Rafael Correa declared victory in the first-round of Ecuador's presidential vote as he celebrated with thousands of supporters in the South American country's capital. 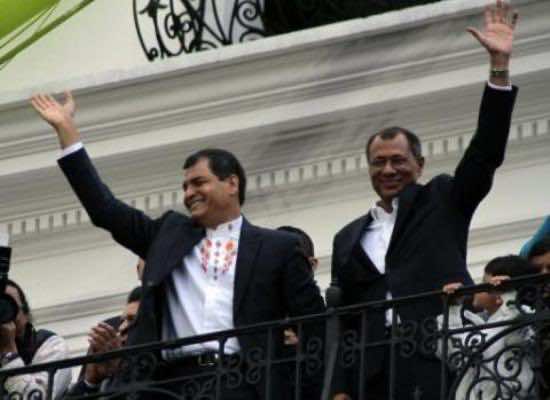 Leftist President Rafael Correa declared victory in the first-round of Ecuador’s presidential vote as he celebrated with thousands of supporters in the South American country’s capital.

“Nobody is going to stop this revolution; we are making history,” Correa said Sunday, echoing the rhetoric of his socialist ally Venezuelan President Hugo Chavez. “We are building our small country, and a larger one, too” he said referring to Latin America.

“We are here to serve you,” Correa, 49, told a crowd from the balcony of the presidential palace in Quito. “Nothing for us, everything for you: the people who deserve the right to be free.”

And “I’d like to take this chance to dedicate this victory to that great Latin American leader who changed Venezuela, Comandante Hugo Chavez Frias,” Correa told a news conference, wishing him a swift recovery from cancer surgery in Cuba.

Charismatic in his supporters’ eyes and authoritarian to his foes, Correa’s announcement came shortly after polls closed in an election he had been widely expected to win.

The first official results polls gave him 56.7 percent of the vote — and a roughly 30-point lead over his nearest rival, banker Guillermo Lasso — with just over a third of ballots counted.

To avoid a second round, Correa needed to win either 50 percent of the valid vote or 40 percent with a 10 point lead over the nearest contender.

At stake besides the presidency are the country’s vice presidency and 137 seats in the unicameral legislature.

Lasso, a finance minister during an economic crisis in the 1990s, had around 24 percent of the vote in the preliminary tally. He conceded defeat shortly after the results were announced.

About 30 percent of Ecuador’s 15 million people live below the poverty line, and Correa’s popular social programs have won him support across the geographically diverse nation, from the Galapagos islands to the sweltering Pacific coast, up the towering Andes and down to Amazon basin lowlands beyond.

Correa, a Roman Catholic supporter of left-leaning liberation theology, grew up in lower-middle class surroundings, mostly separated from his father who served time in a US prison on minor drug charges.

At a time when such social mobility was no small feat, Correa was able to rise up and get a Masters at the Catholic University of Leuven, in Belgium, and go on to earn a doctorate in economics from the University of Illinois, in the US.

A self-declared foe of neo-liberal economics, he has also taken on big business and media groups, imposing new contracts on oil companies and renegotiating the country’s debt while touting his poverty reduction efforts.

After clashing with privately-owned media, which he accuses of backing a police revolt in 2010, Correa barred his ministers from talking with opposition newspapers.

And while he presents himself as a “defender of freedom of expression,” Correa wants to enact a new media regulation law.

Last year, Correa irritated Britain and the United States by granting asylum to WikiLeaks founder Julian Assange — who is wanted for questioning in Sweden over sexual assault allegations — at Ecuador’s embassy in London.

Critics accuse Correa of scaring away foreign capital, pointing to his friendships with the leaders of Cuba and Venezuela, though the Ecuadorian president has been more pragmatic than his leftist allies.

Ahead of the vote, Correa’s Alianza Pais party held the largest bloc of seats in the legislature, but Correa told supporters on Thursday that he needs an absolute majority to deepen his “socialist revolution”.

Correa, in office since 2007, has brought a measure of political stability to Ecuador, which had seven presidents in the turbulent decade that preceded him, including three who were overthrown.