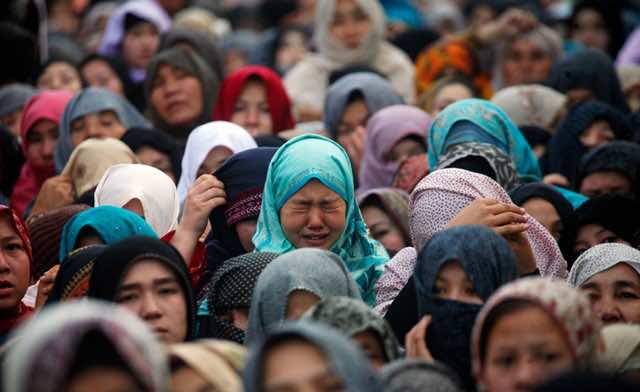 Thousands of women protesters shut down Pakistan’s biggest city Karachi on Monday, as others across the country demanded protection for Shiite Muslims following a deadly bomb attack on Saturday.

Up to 4,000 women began a sit-in in Quetta Sunday evening, after an explosion killed 81 members of the minority community, including nine women and two girls aged seven and nine.

The bomb, containing nearly a ton of explosives hidden in a water tanker, tore through a crowded market in Hazara Town, a Shiite-dominated area on the edge of the city.

It was the second deadly blast in Quetta in little over a month.

The women blocked a road and refused to bury the dead until authorities take action against the extremists behind the attack, which also wounded 178 people.

The sit-in continued Monday at Hazara Town and near a local station, said Wazir Khan Nasir, police chief of Quetta, the capital of the south-western province of Baluchistan.

“We’re going to resume negotiations with Shiite community leaders this morning to convince them to bury the dead,” Nasir told Agence France Presse.

However, a local Shiite party leader, Qayyum Changezi, said protesters “won’t bury the dead until a targeted operation is launched.”

U.N. Secretary General Ban Ki-moon strongly condemned the bomb blast, and called on authorities to act quickly against those responsible.

Sit-ins were held in several cities and towns across the country, demanding an end to the killing of Shiites.

Schools were closed, traffic was off the roads, and attendance in offices was thin in the city. Several political and religious parties have backed the strike call.

Baluchistan has increasingly become a flashpoint for sectarian bloodshed between Pakistan’s majority Sunni Muslims and Shiites, who account for around a fifth of the country’s 180 million people.

Saturday’s attack takes the death toll in sectarian attacks in Pakistan this year to almost 200, compared with more than 400 in the whole of 2012 — a year which Human Rights Watch described as the deadliest on record for Shiites.

A double suicide bombing in a snooker club in Quetta on Jan. 10 killed at least 92 people, the deadliest-ever single attack on the community in Pakistan.

No one has been arrested for that attack, and Daud Agha, chairman of the Shia Conference, told AFP anger was rising in the community.

Although it is customary for Muslims to bury the dead swiftly, protesters after the snooker-club bombing refused to do so, prompting Islamabad to sack the provincial government.

The banned militant group Lashkar-e-Jhangvi (LeJ) claimed responsibility for Saturday’s attack — as it did for the snooker-hall bombing, and a Feb. 1 attack on a Shiite mosque in northwest Pakistan that killed 24.

There is anger and frustration at the apparent inability or unwillingness of the authorities to tackle the LeJ. Activists say the failure of the judiciary to prosecute sectarian killers allows them to operate with impunity.

Baluchistan Governor Zulfiqar Magsi pointed the finger at the security forces over the latest atrocity.

“Repeated occurrence of such attacks is a failure of our intelligence agencies,” he told reporters late Saturday.

“Our security institutions, police, FC [paramilitary Frontier Corps] and others are either scared or can’t take action against them.”

Pakistan is due to hold a general election in the coming months, but there are fears that rising sectarian and Islamist violence could force their postponement.