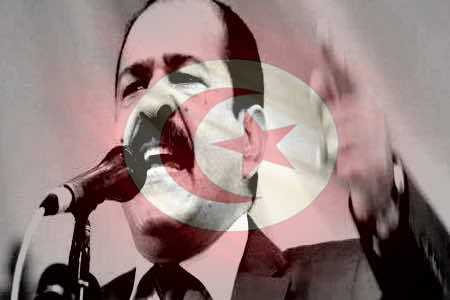 A statue erected in honour of murdered Tunisian opposition leader Chokri Belaid was found vandalised and broken into three pieces during the night, an AFP correspondent reported on Monday.

The memorial, installed as a work of contemporary art by Tunisian artists, was ripped off from its base and broken, and the flowers surrounding it were trampled and scattered.

“This is a criminal act. Those who did this are inhuman, they have exceeded all limits,” said Besma Khalfaoui, the widow of Belaid who was gunned down in broad daylight on February 6.

“It is the minister of interior who is responsible for this,” she said, referring to Ali Larayedh.

Khalfaoui said she had demanded police protection for her family and home but so far had not obtained it.

Belaid, a leftist leader and fierce critic of Tunisia’s ruling Islamist-led government, was shot dead by a gunman as he left his home.

His murder sparked a public outcry in Tunisia, plunging the country into its worst political crisis since the revolution two years ago that ousted former dictator Zine El Abidine Ben Ali.

Belaid’s backers accuse the ruling Islamist Ennahda party for the murder, a charge which the party denies. So far there has been no progress in the murder investigation.